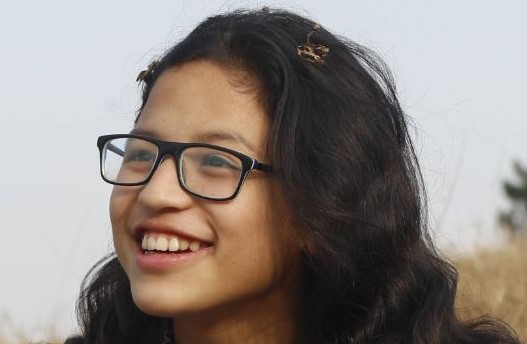 Crouched between the balcony rods, she stared into the vast horizon. The world was a busy place, but at that moment, sitting solitarily at the top of her world, everything seized to exist... just her and the pieces of nature. It was one of those days where she wanted to forget everything and just disappear.

A girl with a serene mind, humming to the melody, the air composed. Maybe it was the beauty of the painted skies or perhaps the novelty of the playful breeze, but there was something that lured her into a world she was unaware of. That was the day; a normal girl became 'infinite.'

From yellow to amber to red and then finally Stratos, the color-changing sky reminded her of birth and death. As the images of a crying newborn infant flashed across her mind, she shuddered on the thought of the cold blue-black body of the dead. That was when she realized she had not been living but rather waiting for death. So, how many times had she actually 'lived?'

Maybe this was the first.

There was the sudden warmth of nostalgia. Time slipped no matter how much she tried to hold on to it. She had been warned, but she never cared to listen. With every blink, a memory flashed. Thoughts paced, but not once did they blur. Oh, how the days were spent!

Some of such days, she would wish that she could go back and change that one decision. But this time it was different. Right then, she was grateful of every breath she had taken; every moment she had live. At this moment, she felt the presence of the whole world, and the air around her no longer seemed to choke her. Everything made sense. The blithe sound of children playing and laughter of the teenagers, they all became a part of her. The world was a busy place, and she was a part of it at last. As a flock of white birds flew above her, it marked the start of a new journey. It marked the birth of a phoenix.

Her soul that was so tranquil was now drifting, drowning, dying, all at the same time. Her serene mind was taking notice of every moment, every mistake of the past and the present. The persistent sanguine silence turned into beautiful chaos and the girl that felt nothing was now feeling everything.

So that was what infinity felt like. Amidst the beautiful creation of God, melting into a part of the earth was where she found her peace, where she could become vulnerable without ever feeling insecure. The world slowly started to darken, but at that moment, she was the moon that glowed in the midnight sky. Even though she left had the world of infinite, she was secretly still carrying a part of it with her. A final gaze at the world above her, and she promised, she made an unbreakable oath.

She'd be there every day to escape, to forget Reality and dive 'Into infinity.'

The writer is a tenth grader at Pathshala Nepal Foundation, Bagdole.