The story of Nepal's 'Zone of Peace' proposition to the world 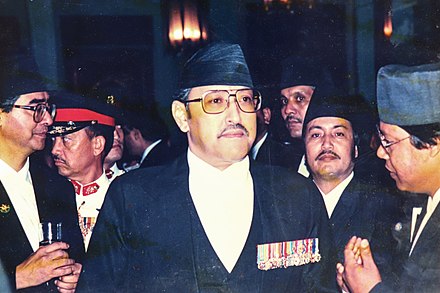 Itahari, 21 September (2020) - Today 21 September is the UN-designated International Day of Peace which was effective from 2002 during the tenure of seventh Secretary General of UN Kofi Annan.

Despite the beginning of UN-sanctioned celebration of International Day of Peace since 1981, it would be observed on third Tuesday of every September. However, in 2001 Secretary General Kofi Anna provisioned 21 September as its official celebration day.

When it comes to International Day of Peace in the UN circle, the issue of Nepal's proposition to be 'Zone of Peace' by king Birendra also comes into diplomatic history of Nepal.

The formal proposition of 'Zone of Peace'

In the 4th Summit Conference of Heads of State or Government of the Non-Aligned Movement at Algerian capital Algiers, which was held from 5-9 September 1973, King Birendra made a long speech. In the speech, he made indirect proposition to establish Nepal as the 'Zone of Peace'.

Writing for the New York-based journal called SAGE journals on 1 January 1977, J.P. Ananda , in his article titled 'Nepal's Zone of Peace Concept and China' quotes king Birendra as saying, ''Nepal, situated between two most populous countries in the world, wishes within her frontiers to be evolved into a zone of peace.''

On 25 February 1975, King Birendra gave farewell address to the visiting dignitaries from 60 countries arriving for his coronation ceremony at Kathmandu. On the occasion, Birendra again floated international proposition for the ''Zone of Peace''.

In his speech Birendra said, '' We adhere to the policy of non-alignment because we believe that it brightens the prospects of peace. We need peace for our security, we need peace for development and we need peace for our independence. As a matter of fact, Nepal in the past has signed formal peace and friendship treaties with both our friendly neighbors. And if today, peace is an overriding concern with us, it is only because our people genuinely desire peace in our country, in our region and everywhere in the world. It is with this earnest desire to institutionalize peace that I stand to make a proposition that my country, Nepal be declared a zone of peace.''

According to Keshab Prashad Bhattarai, who is associated with Nepal Institute of Strategic Studies, prior to these two international forums of ''Zone of Peace'' proposition, King Birendra had talked about it at a function of Nepal Council of World Affairs on 11 July 1973.

According to an article penned by Uma Kant Sharma at Journal of Political Science, which was issued on 1 December 2004, the seven-point definition was outlined by the then Foreign Minister during his address at Nepal Council of World Affairs on 21 February 1982.

1. Nepal will adhere to the policy of peace, non-alignment and peaceful co-existence and will constantly endeavor to develop friendly relations with all countries of the world regardless of their social and political systems and particularly with its neighbors on the basis of equality and respect for each other's independence and sovereignty.

2. Nepal will be seeking peaceful settlement of all disputes between itself and any other state or states.

3. Nepal will not resort to use or threat of use of force in any way, which might endanger the peace and security of other countries.

4. Nepal will not interfere in the internal affairs of other states.

6. Nepal will continue to honor the obligations of all the existing treaties which it has concluded with other countries as long as they remain valid.

Support from across the world sans immediate neighbor

Since its inception in 1973, Nepal's ''Zone of Peace'' proposition was widely advocated at all diplomatic fronts and international forums represented by Nepal. Many countries supported this proposition. Those supporting included US, China, Pakistan, Bangladesh, Sri Lanka and many more countries.

The number of countries standing by Nepal's ''Zone of Peace'' proposition is not similar in many publicly available articles. Some say 30 countries. However, in an article published at the Journal of APF Command and Staff College, Gopal Khanal, the Consultant Editor at The Rising Nepal, said 114 countries supported the proposition.

Interestingly, when the world was supporting Nepal's proposition, immediate neighbor India did not support it. It was said that India gave logic of Peace and Friendship Treaty of 1950 as the only basis of its relationship with Nepal.

According to the article, on 20 July, 1975 and the Soviet Ambassador to Nepal K.B. Udumyan declared: ''The soviet people heartily acclaim the policy of positive neutrality being followed by Nepal. They strongly support Nepal's policy of peace, and of opposition to imperialism, and neo-colonialism.''

Many Nepali diplomatic commentators suspect Indian hand behind Soviet Union's reluctance for its withdrawal from its previously supported Nepal's ''Zone of Peace'' proposition.

Need of public debate on the relevancy of ''Zone of Peace''

With the demise of partyless Panchayat system in 1990, ''Zone of Peace'' proposition was also edged out both from political and diplomatically fronts.

Dr. Khadga K.C, a professor at Department of International Relations and Diplomacy of Tribhuvan University, said, ''Zone of Peace'' proposition was unfurled at a time when South Asia was going though rapid political changes like creation of new nation of Bangladesh and merging of Sikkim into the Indian Union. KC said the cold war rivalry between the then superpower USA and Soviet Union was also a driving factor for ''Zone of Peace'' proposition by king Birendra.

''After the restoration of multiparty democracy in 1990, all Panchayat-era programs were disowned'', said K.C. He added, ''In the emerging version of cold war between China and USA, I am of the view to initiate public debate on the relevancy of ''Zone of Peace'' in contemporary Nepal.'' RSS