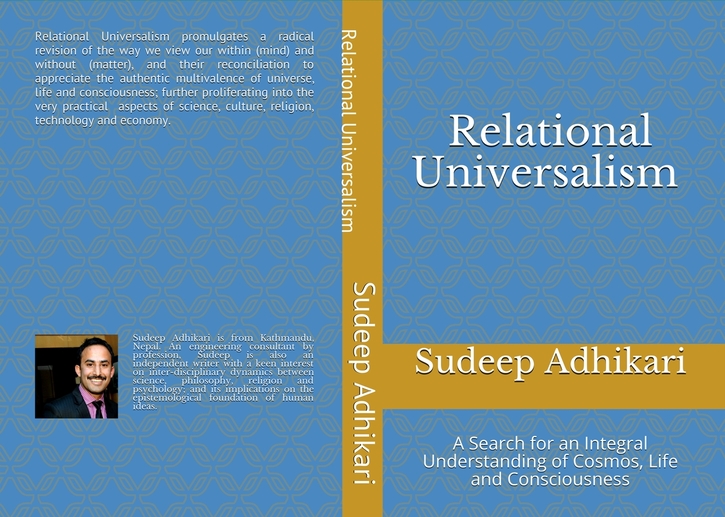 You know that Fractal Geometry forms the basis for structure formation of complex systems? No? Shame on you!

If you read Relational Universalism you will learn about fractals and much more.

Sudeep Adhikari is an engineering consultant by trade and poet by proclivity. He lays down a heavy rap; a long and mostly fascinating rap, delving into mysteries of existence, origins, and creation, while considering complex systems; economic, psychological, societal, technological, etc.

His is an attempt to explicate meaning of life, cosmos, and consciousness through a multi-disciplinary approach (philosophic, artistic, spiritual, scientific-religious). In the attempt offering "Relational Universalism," a "philosophical," he writes, rather than "scientific" theory--relational not atomic--a "convoluted and relational whole." Offering a new paradigm, in fact; one of holistic approach and in response to failures of traditional scientific and religious modes of thinking. Those old causal, reductionistic, mechanistic paradigms (Cartesian, Newtonian, Euclidian) inadequate in explication of life, cosmos, or consciousness.

The old false paradigms (Cartesian, etc.) of duality have duped us, Sudeep suggests. "Straight-jacketed" our presumptions into reductionistic, linear, and causalistic thinking.

The dualism of these out-molded paradigms mistakenly view, Sudeep argues, mind and body as separate, instead of interconnected. The proposition of Relational Universalism means a switch from the linear-causalistic outlook to a more relational world-view; a world-view more holistic, dynamic, and processorial than the world-view of dualistic paradigms, thus, a more truthful or more exact reflection of life, cosmos, and consciousness.

Consciousness, one of the complex systems, economic, societal, environmental, technological, etc., Sudeep considers, stating that consciousness cannot be comprehended in totality through current scientific methodology. He offers his own relational definition of the noumenon, speaking as much as poet as engineer: "a process, a becoming, an ever proliferation; a coexistence of convergence and divergence, a mobious-strip...inexact whole, plural category, that creates, recreates, destructs, deconstructs, dissipates...an incomprehensible rhizomatic fuzz of randomness, chaos, and multiplicity."

Each of the complex systems (several already named) has its day in court; that is, approached relationally. No answers to age old perplexities to be found here. What is found are new questions to ask, more relevant ones than the old in addressing the flux of "life" in its permutations.

Sudeep has written an intriguing book, erudite, and of great depth (though being a non-science person, I cannot judge with much confidence the exact depth), and unquestionably broad scope, ancient Greece to modernity. This is expository prose, utilitarian, freighted with technical terminology, and some tidbits of personal information. Unavoidably dry at times (for this reader), but even during the most abstruse considerations, the narrative unfaltering.