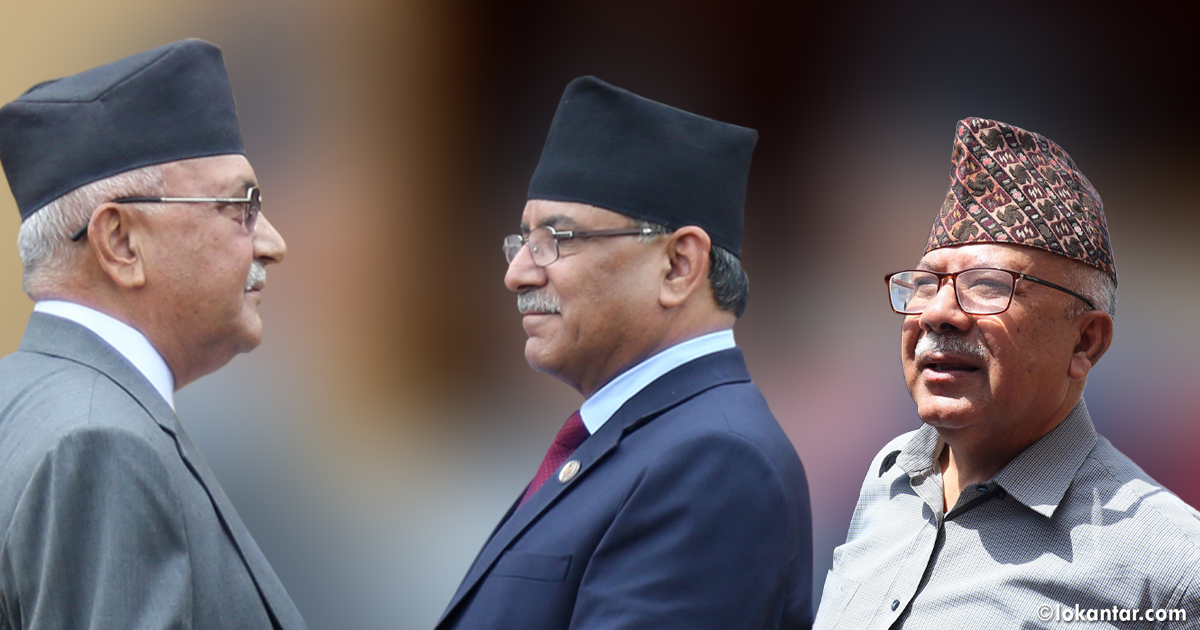 Bhupi Sherchan, Nepali poet par excellence, has presented an unflattering description of Nepali people's character in one of his poems "Hami" (We): We cannot come together on our own/someone has to patch us up.

The temporary ceasefire among bigwigs in the incumbent Nepal Communist Pary (NCP) facilitated by Chinese envoy Hou Yanqui reminds one of Bhupi's portrayal of Nepali character.

A little background is in context. The frantic parleys of the top brass in the last three days has ended for the time being as the party's top level Secretariat meeting has been postponed for 10 days on Wednesday.

Dissatisfaction against Prime Minister KP Sharma Oli's "arbitrary governance" had been brewing in the party for the last one year. The PM is also the Chairman of the party and Executive Chairman Pushpa Kamal Dahal "Prachanda" is unhappy about being practically treated as an "inferior". He had tried to unseat Oli from one of the posts, if not both, by making alliance with other top leaders including Madhav Kumar Nepal and Jhala Nath Khanal earlier as well.

The latest brouhaha arose when Prachanda submitted a proposal that incorporated a litany of allegations against PM Oli who was furious to learn about the contents. He asked Prachanda to retract the proposal saying that otherwise there would be no party meeting. But Prachanda and Nepal were adamant in calling for the meeting at the earliest.

This rigid stance inspired the chattering class to hint that the party is on the verge of split (yet again).  Oli met with President Bidya Devi Bhandari two times in two days and also with the Chinese envoy. Cool heads prevailed and now Oli has pledged to submit a written rejoinder to Prachanda's allegations in the next Secretariat meeting.

When things turned ugly, the Chinese ambassador started having dialogues with the NCP top brass. Some months ago too, she had made hectic parleys to save the party from the possible split. Grapevine has it that Chinese President Xi Jinping made a call to his Nepali counterpart to facilitate dialogues among leaders so that the party remains intact. Yanqi paid visits to the leaders only after that. Although NCP Spokesperson has refuted this suggestion, there is a strong basis to believe it.

Ever since the merger between CPN-UML and CPN-Maoist Center to become NCP, the Communist Party of China (CCP) is heavily engaged with the NCP. Last year the CCP organized a workshop in Kathmandu on Xi Jinping Thought and Socialism with Chinese Characteristics. This year too when China and India were in a standoff in Eastern Laddakh, NCP leaders organized a zoom meeting with the CCP. Later, the CCP organized another zoom meeting with major party leaders in Nepal.

Ostensibly, the CCP wants Nepal to expedite Xi Jinping's flagship Belt and Road Initiative projects but its aim in Nepal goes deeper than that. It may not have been stated in clear words but the CCP wants a satellite communist party in other countries that accepts Xi Jinping Thought as the guiding principle.

CCP's thinking seems to revolve around the fact that if there can be a communist party in Nepal with North Korean Juchhe Thought, there is no harm in having a communist party with Xi Jinping Thought. The bigger the communist party, the better. So, President Xi himself seems to have invested politically on keeping NCP intact so that his ideology crosses the border and is accepted by another country.

China has now strategically become a South Asian country and Nepal is the most fertile ground for Xi Jinping Thought to prosper, given the strong communist base here. No other communist party in any country of South Asia enjoys state power like the NCP. Therefore, the CCP would like to wield its influence in Nepal only for the world to show its ideological success.

The CCP's wrath against Nepali Congress for raising the issue of alleged land encroachment in Humla district can also prove to be a beneficial political capital for the NCP.

This increasing "encroachment" of the CCP in India's "traditional backyard" is certain to have shaken the Indian establishment. Ruing for the loss of influence in Nepal post-blockade, India too is trying its best to regain the foothold. This is the reason why India's external intelligence agency R&AW Chief Samanta Kumar Goel had a one-on-one meeting with PM Oli in the wee hours. Some say that the fresh dispute in NCP is an outcome of Goel's tete-a-tete with top leaders of major parties.

Indian Army Chief Manoj Mukunda Narvane followed Goel in an ostensibly formal program in which he was conferred with the title of Honorary Army Chief of Nepal as per the longstanding tradition. But he too seems to have been Indian PM Narendra Modi's messenger just like Goel before him, asking Oli not to jump to the other side (read, Chinese).

India's Foreign Secretary Harsh Vardhan Sringala is also paying a visit to Nepal this month and there are hints that India's Minister of External Affairs S. Jaishankar and Defense Minister Rajnath Singh will follow him. This procession shows India's desperation to keep Nepal under its fold at a time when the dragon has rapidly made inroads in Nepal and the south Asian region.

How Nepali leaders will maintain the country's neutrality vis-à-vis both the neighbors will be an interesting phenomenon. Meanwhile, all eyes will be on Oli's written rejoinder to Prachanda's allegations that may start another bout of wrangling within the party.

Karnali, 26 February (2021) - Speakers at a programme have stressed the need for providing grants t…