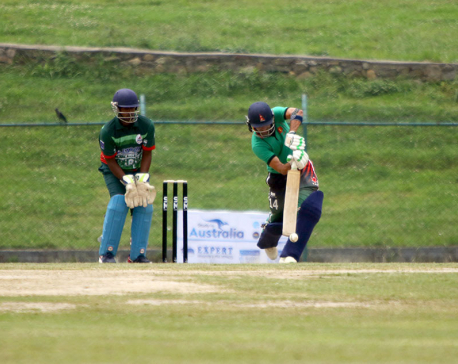 Kathmandu, 1 January (2021) - Kathmandu and Lalitpur teams have registered their wins in the Bagmati province’s selection tournament under the PM Cup Men’s National Cricket. In the selection round matches played at Kathmandu Mulpani-based cricket ground on Thursday, Kathmandu defeated Bhaktapur by four wickets while Lalitpur triumphed Tribhuvan University team by 291 runs.

Put on bat after winning the toss, Bhaktapur scored 97 runs in 33.4 overs. Kathmandu chased the winning target of 98 runs in 23.5 overs at the loss of six wickets.

Likewise, in another match played at Tribhuvan University’s sports ground on Thursday, Lalitpur outshined TU team with the double century of Adin Khan. Winning the toss, Lalitpur had gathered a mammoth runs of 375 in 40 overs at the loss of four wickets. In response, TU team only made 84 runs in 29.4 overs while chasing the victory target of 376 runs.