O King, save our country! 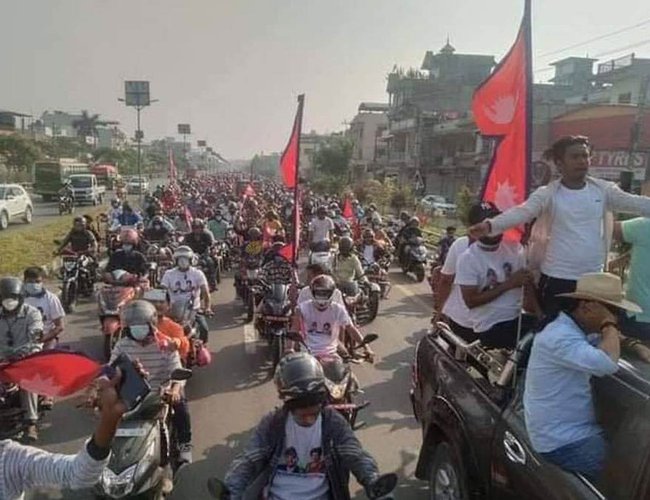 Raja aau, desh bachau – These days pro-monarchists are busy chanting this slogan at high decibel noises. For a non-Nepali speaker, the literal translation will be: “Come back king, save my country”. However, the fact is that neither the King is coming back nor the country, sans monarchy, is in a need of a savior. There is also a bit of confusion over which raja they are calling for – Sri Panch, Sri Teen, Malla King, Lichhavi King or Kirati King?

Morale of the monarchists

A couple of factors can be identified for boosting the morale of the monarchists. Obviously, the first one is the choppy political waters. Failures of secularism, federalism, and republicanism have provided ammunitions for the rajabadis as Nepal’s monarchy represented a unitary, centralized Hindu state.

It is not only the monarchists that are flogging the dead horse; even the diehard anti-monarchists are busy churning propaganda materials. For example, Home Minister Ram Bahadur Thapa aka Badal is reported saying reinstatement of the parliament will help revive monarchy while his recently turned archrival, Puspa Kamal Dahal aka Prachanda is having an opposite view: dissolution of the parliament is a process towards reviving monarchy. One can fairly imagine why royalists are so buoyed given the diametrically opposite views coming from die-hard, anti-monarchist Maoists. There are other leaders referring to Hans Anderson’s Emperor’s New Clothes and assuming themselves as a kid having courage to say “the King has nothing on”. It sounds like the monster of monarchy is deeply ingrained in the minds of our political leaders even after its abolition in 2008.

The second factor is the rise of Bharatiya Janata Party (BJP) and its Hindutva in India. Mixing politics and religion may work in some primitive societies; definitely, it is not beneficial in the long run. By visiting Hindu temples, shrines, and deities and offering puja, and lighting agarbatti, former King Gyanendra may pull some crowd and well-wishers. But it will be pure imagination to believe that the bunch of colorful crowd help reinstate monarchy in Nepal. Secularism got introduced, not because Nepal is multi-religious country, neither it has to do with, as often assumed, the designs of the foreigners; it is purely to get rid of Hindu based monarchy.

The other plank that monarchy is portraying is extreme nationalism – one country, one dress, one language – as a basis of national unity. The problem with extreme nationalism is that it is goes against Hinduism. Hinduism demands the support of BJP in India while Nepal’s nationalism is often equated with anti-India stand. Former King Gyanendra himself has asserted--may be for public consumption--that he is not interested in monarchy reinstated with India support.

If the royalists have used the robe to project their religious stand, these days Tiktok and other social media platforms are being used to attract the youngsters. These youngsters, the millennials (1981-96) and the Generation Z (1997-2012), the descendants of elite class who enjoyed uninhibited access to power and wealth during bad old panchayat days, are currently the die-hard fans of monarchy. Having a single lion is better than thousands of jackals- their logic is understandable. But, least they forget, democracy works with thousands of competing jackals, not with a monopolistic monarchy. The youngsters have a little knowledge and experience of anarchy caused by monarchy and are heavily sympathetic to late King Birendra's family after “palace massacre”. In no way, they subscribe to Dipicide Theory – regicide, matricide, fratricide, homicide, and suicide rolled into one.

A couple of interesting features could be drawn from pro-monarchy rallies. First, they have a unique style and also a status - they start no less than with zooming motorbikes. Hopefully, someday, they might resort to plying BMWs and other vintage cars. Second, you often find yellow saffron clad sadhus and saints holding trishul and damaru in their procession. This is to send message that they are adherent fans of Hinduism. Third, they carry triangular shaped Nepali flag – to give an impression of national unity and prefer to wear daura suruwal, officially prescribed national dress during panchayat days.

Many people are suspicious of mass demonstrations abruptly organized by the royalists during the first week of January, to be incited by the Oli Government. There must be some relation between Oli government and the royalists as some royalist lawyers are pleading on behalf of Oli Government in the Court over writ petition filed against the untimely dissolution of the parliament. Royalist party Rastriya Prajatantra Party is the only party that has wholeheartedly welcomed the decision to go for the polls. Even Communist PM Oli has started visiting Pashupatinath Temple. There may be some tacit support and rapport between Oli Government and the royalists. Who knows the country may already be treading the paths of monarchy, probably of a different kind!