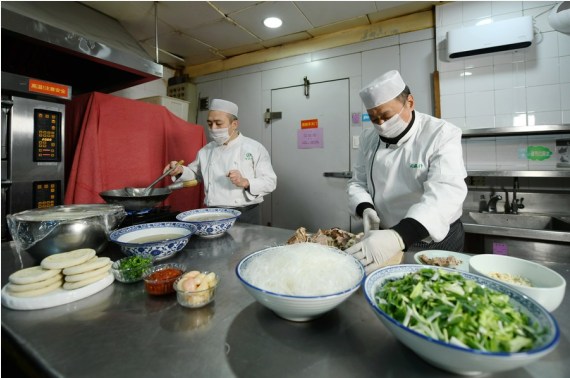 Xian, 16 February (2021) - In just one minute, Wu Ping stirs "Mo" bread cubes and sliced mutton into the soup, tosses the pan with a flourish and pours the contents into a bowl to serve up the mouthwatering "Yang Rou Pao Mo," or mutton soup with Mo bread, a signature dish of Shaanxi Province, northwest China.

The same one-minute process has been helping fill the bellies of countless customers for a century at Tongshengxiang restaurant in downtown Xi'an, capital city of Shaanxi. Tables were packed with eaters excitedly chatting about the lunar New Year holiday, and they broke up their Mo bread into small pieces.

However, for that one minute, a master chef like Wu must hone his craft for decades. The 58-year-old national-level inheritor started as an apprentice in 1981 learning how to cook this dish, which is an intangible cultural heritage.

To his surprise, the first lesson had nothing to do with cooking.

"It was a moral lesson. To excel in this industry, one must cultivate their morality. That's the first thing my chef teacher taught me," said Wu.

Morals first, and diligence throughout. Preparation of the dish usually begins days earlier. Apprentices must wash, cut and stew mutton and beef for around two days to produce the perfect broth, and slice the meat into thin pieces for the head chefs.

Every day, apprentice Wu had to process at least 200 kilograms of mutton and beef. He got up early in the morning and wouldn't rest until midnight.

"It's an exhausting job, most young people couldn't stand it," said Wu.

Wu would not progress to the essential one-minute part until he had mastered the art of making broth and slicing the meat so it is just right. He would practice in his free time with left-over bread.

Today, as head chef of Tongshengxiang, Wu has mastered the art. To make sure the taste is timeless, just like it was 100 years ago, Wu sources lamb from breeders in the neighboring Ningxia Hui Autonomous Region and beef locally. A total of 22 ingredients including pepper, aniseed and cinnamon are also added, the adjustment according to the four seasons.

The dish is not complete without its signature flat, white mo bread. It is said that the perfect bowl of Yang Rou Pao Mo is a duet between the chef and the customer. The eater must break the Mo bread into cubes as small as  soybeans before handing them for the chef to cook.

Throughout Wu's 40-year career, he knows how to adjust the heat and cooking duration to meet different customers' demands.

"Every detail matters. One wrong step could ruin the whole dish," said Wu.

With retirement not far away, Wu's mission of preserving the original Shaanxi taste has been handed down to his own apprentice Sun Qiang. Just as Wu imparted his wisdom, Sun, too is teaching his two students everything he has mastered over the past two decades.

"There are fewer and fewer skills now. We must preserve our art," said Sun.

"Yang Rou Pao Mo is just like an antique. Traditional things are the most precious," said Wu.