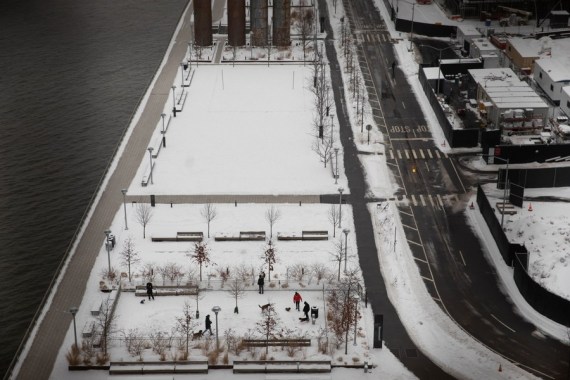 Beijing, 22 February (2021) - The American people are being thrashed by one crisis after another: The raging coronavirus pandemic has so far taken almost 500,000 lives in the country; roaring blizzards have killed some 50 people in Texas and other southern states, and left millions more struggling with frost, darkness and disrupted daily lives.

The dire situation has once again busted the human rights fairy tales the world's sole superpower has flaunted for decades, and revealed the hollowness behind the country's brassy promises to its citizens.

For quite some time, the human rights that have been truly preserved and promoted in the United States are those of the powerful and the wealthy. At the same time, such basic human rights as those to life, health and even survival of the general public have been either neglected or damaged.

Following the coronavirus outbreak in the country, the previous U.S. administration, which should have devoted itself to beating the disease and saving lives, had chosen intentionally to downplay the threat of the deadly virus, spread lies and misinformation, and sought to shift responsibility to others.

The American public has paid a bloody heavy price for Washington's arrogance and ignorance. The United States now still ranks first in terms of infections and deaths worldwide. Life expectancy in the country fell by an astounding full year in the first half of 2020 due to the pandemic, with minority groups suffering the sharpest declines, according to the U.S. Centers for Disease Control and Prevention. A report published on Feb. 10 by the Lancet pointed out that around 200,000 Americans should not have died if proper measures had been taken.

The ferocious winter storms have offered American politicians another chance to display their indifference to the welfare of the American people.

While the howling storms have led to freezing temperatures and widespread power blackouts in Texas, the state government and local power grid operators have so far failed to bring forward a timetable for power restoration. Some unscrupulous companies have taken the advantage to charge exorbitant prices for essential supplies of electricity. And as millions of Texans are shivering in coldness and desperate for water and food, Senator of the Lone Star State Ted Cruz flew to Mexico for holidays.

What is more jaw dropping is that Mayor of Colorado City Tim Boyd posted on Facebook recently that the local government has no responsibility to support the people amid the weather crisis, and that "only the strong will survive and the weak will perish."

While showing little interest in promoting the human rights of their own people, some Washington politicians have turned human rights into an excuse for meddling in the businesses of others overseas.

Pretending to care about the human rights far beyond its shores, Washington militarily intervened in the Middle East, causing huge losses of human lives there, and smeared China over alleged human rights abuses in Xinjiang and Tibet to stoke divisions and instability in China, and to contain the country's development.

In the famous Danish fairy tale, the little match girl could still light matches to have warmth and the feeling of being loved, even though those were illusory.

For the ordinary Americans in the face of blizzards and the pandemic, even those hallucinations are out of reach, except that both they and the little match girl live in fairy tales.