When people are baffled by the unfolding of intricate events they churn out conspiracy theories, possibly as a rationalization process. People are baffled because they cannot dissect causes from effects or even differentiate between symptoms and causes.

Remember the number of conspiracy theories circulated in the aftermath of royal palace massacre in 2001? People could be heard talking about Dipendra lookalike guy finishing the job; to the works of kaalo padartha (drug); to the works of CIAA, RAW, Maobadi etc. As a simple visual guide to understanding the concept of conspiracy theory, I have copied here an illustrative cartoon from the Oxfam blog site. 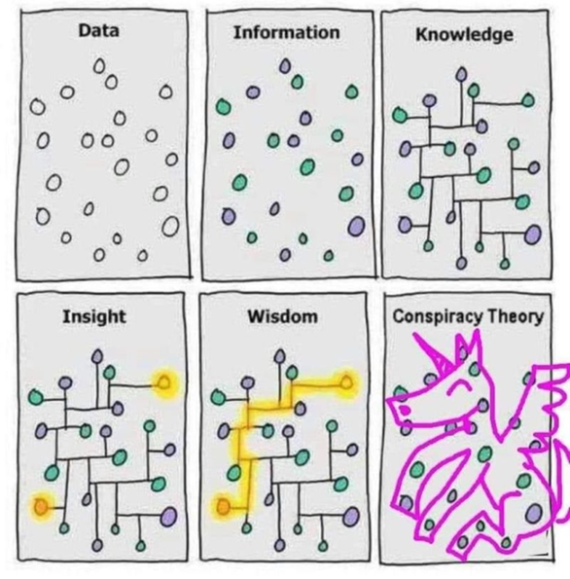 The ongoing political events have baffled many people. Lack of information and misinformation, including use of social media, is helping to churn out conspiracy theories. I have collected here five of them for the interest of the readers. More theories can be added to the list.

The flaring of dispute within Nepal Communist Party (NCP) is taken as an artificially concocted drama, purely made for public consumption. These days, two clichés in Nepali - natak and nautanki, meaning drama/play are in circulation. This theory is being triggered primarily by the inaction of the Election Commission. The Commission has not been able to decide which of the two factions is the legitimate NCP. So far, no faction has dared to register itself as a new party; instead, both are claiming to be legitimate NCP, accusing the other as a breakaway group.

The conspiracy theory of communist drama got further support when PM Oli, after his decision to dissolve parliament, proposed Prachanda-Nepal faction to jointly contest upcoming elections. With the restoration of the parliament, there is speculation in the air that NCP may again form its government, possibly after reaching compromises between two disputing factions. Comrade Bam Dev Gautam is very much hopeful and determined to have reunification of divided NCP. Don’t get surprised if tomorrow, out of nowhere, if you happen to read news about re-unification between two factions of NCP.

The second popular conspiracy theory is related to the revival of monarchy. It is not just anti-republics, anti-federalists, anti-secularists or pro-Hindu, pro-nationalists (read anti-India) or the pro-royalists spreading this message.  PM KP Sharma Oli is also responsible for spreading this message. By organizing a mass meeting right at the gate of Narayanhiti royal place, either by design or default, he has indirectly sent a message to the public on the possible revival of monarchy.

At the start of this year, several demonstrations were organized by the royalists across nearly all city centres. Many believe this to be designed by PM Oli himself. The theory gained further currency when some lawyers supporting revival of the monarchy pleaded on behalf of PM Oli in the Constitutional Bench. Now, the royalists are churning out their own idea that PM Oli dissolved the parliament to distract public attention from the return of monarchy. In fact, royalists' voices have been subdued with the dissolution of the parliament.

The 'setting' theory is being popularized by Prachanda-Nepal faction. Some advocates of this theory can be found in the camps of Nepali Congress as well. The basic underlying factor here is that PM Oli has designed a complete setting all over state agencies like the judiciary, the bureaucracy, the constitutional bodies, oversight and security agencies including private sector business firms to have a total grip on power structure, resembling a complete state capture. Under this conspiracy theory, even Nepali Congress president Sher Bahadur Deuba is under influence. This is inferred from his wishy washy, willy-nilly stand on parliament dissolution and launching of a joint political movement.

The credits for inventing “setting theory" can be given to the gold smugglers and manpower exporters at the Tribhuvan International Airport and custom points or for securing big public contracts within the government.  People believe in this conspiracy theory because of the PM’s overconfidence in securing two-third majority in the elections or court approving his decision. Remember, Subas Nemwang saying the PM is 200 percent confident in his decision to dissolve the parliament?

Near backdoor entry of nearly three dozen officials into constitutional bodies have also raised alarm over setting theory in operation. With the court overturning PM’s decision to dissolve the parliament, currently, the theory has receded a bit. Yet there are no less people believing in the setting theory.

In economics, Adam Smith propounded a theory of “invisible hand”. In Nepali politics we have propounded “foreign hand theory”. There is no conspiracy theory in Nepal that is devoid of putting a blame on a foreign country or countries. In fact, we love to hate foreign countries for all our ills and misfortunes.

Obviously, the first country we like to blame is our southern neighbour, its external intelligence agency R&AW in particular.  Sometime we get confused reading the acronym in reverse order. Many conspiracy theorists, even big political leaders, still claim that present political crisis have been triggered by PM’s late night meeting with the Chief of R&AW, Samanta Goyal, at his residence Baluwatar.

Some Indian intellectuals are also responsible for spreading the message that present crisis is originated in India. An Indian intellectual has admitted that India has been totally successful in deploying its strategy in Nepal, first by dividing NCP, second by distancing it away from Chinese influence and, third, by dissolving the parliament as a sanction for cartographic encroachments. Very recently, Tripura chief minister Biplab Deb’s statement added fuel to fire. He claimed that Indian Home Minister Amit Shah had plans for “BJP governments” to be established in Nepal and Sri Lanka. Earlier, a former ambassador to Nepal commented that India is looking for a non-controversial PM in Nepal. Comments like these help to brew foreign hand conspiracy theory.

Equally, we also point fingers at China. An excessive activism shown by the Chinese ambassador, during the height of NCP dispute, also helped to gain support for the foreign hand conspiracy theory.

Comrade Prachanda’s call for foreign support for his political movement, including recently made remarks that a coalition between this faction, Nepali Congress and JaSaPa will be comfortable to India and China; plus recent visits by former PMs to India for medical treatments all have helped to boost foreign hand conspiracy theory.

There are no less people believing present crisis is due to clash between Belt and Road Initiative and Millennium Challenge Corporation (MCC). Many believe former Speaker Mahara was implicated for sex scandal because he resisted MCC debate in the parliament. The present Speaker Agni Sapkota is also blamed for dillydallying in parliamentary ratification of MCC. Had this not been an issue why would Maoist minister Top Bahadur be so vocal about MCC? Even former PM Jhal Nath Khanal has to correct his statement after being dragged into MCC controversy over his televised interview. I suppose foreign hand theory is the most pervasive and popular conspiracy theory circulated in Nepal.

With the Nepali Army displaying its arsenal to the public, coinciding with army coup in Myanmar, there is despair in the air that the communist regime in Nepal too is following the military footsteps of Myanmar. This is to have a complete state capture. The emergency rule theory is bolstered by ongoing political impasse situation. Some pro-monarchists are openly advocating former King Gyanendra-style of army takeover or the imposition of the emergency rule.

Prachanda’s recent call for having human chains around Tundikhel and, similarly, some civil society activists, seeking to have a forced entry into Tundikhel on Democracy day are, if not symbolic, triggered by the idea of possible army takeover. There is some grain of truth in this theory. This primarily comes from inordinate expansion of Nepal Army, not just in terms of numerical strengths but also their commercial and economic interests.