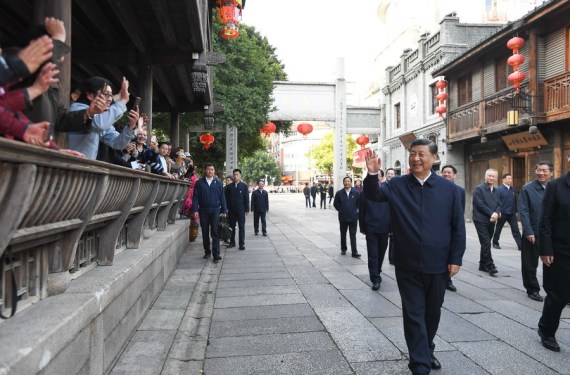 Beijing, 26 March (2021) - The latest footprints of Chinese President Xi Jinping have revealed the country's unwavering determination to pursue high-quality growth, which is key to its modernization drive.

In his first inspection trip outside Beijing following the conclusion of this year's annual "two sessions", Xi, also general secretary of the Communist Party of China Central Committee and chairman of the Central Military Commission, visited east China's Fujian Province.

His tour to the Chinese province, where he previously worked for about 17 years, came as China reaffirmed its commitment to people-centered high-quality development as it enters a new development stage.

Fujian is one of the key places where Xi's thought on ecological civilization was conceived and put into practice.

The thought, exemplified by the Chinese leader's well-known remarks "Lucid waters and lush mountains are invaluable assets," profoundly reveals the general laws of economic development and environmental protection in the development of humanity.

Xi's latest green footprints echoed China's green ambition which has been fully illustrated in the country's newly approved development blueprint for the next five to 15 years to guide the country's march toward modernization.

Having taken notes from the West, China will not choose a development path that consumes a large quantity of non-renewable natural resources in the process of its modernization.

When underscoring the importance of independent innovation, Xi called for accelerating the pace to achieve self-reliance in science and technology. It has been a consensus in China that innovation is the primary driving force behind development and China must pursue innovation-driven growth and make breakthroughs in key technologies to achieve high-quality development.

In Fujian, Xi talked about people's health which the leader called a hallmark of socialist modernization.

In China's modernization vision, there is not only a drastic increase in economic production capacity but also comprehensive social progress. China seeks a people-centered modernization that is different from the Western model in which capital is the primary driver and dominant logic.