30 years of change in China through lens of French photographer 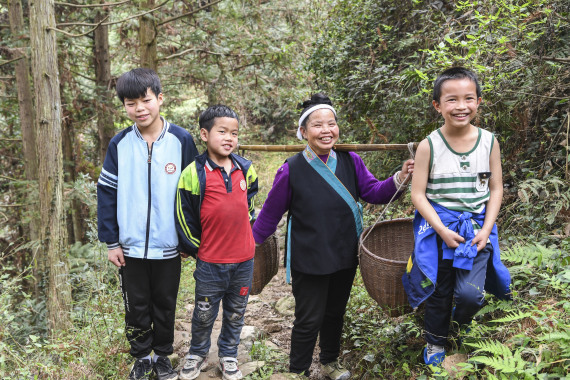 Beijing, 30 March (2021) - The moment when Yann Layma, a renowned French photographer, once again met Yang Naiqunjian, a character from his photos taken in China 30 years ago, he was more than surprised.

The reunion via on-line video chat in early March threw the photographer's memory back to the day in a hillside hamlet of the Dong ethnic group in south China's Guangxi province, when he took the photo of Yang. "At that very instant, we are connected to the past," said Layma in a recent interview with Xinhua.

Layma said that when he bumped into Yang, she was walking along a mountain path, shouldering a bamboo pole, with two of her little sons sitting squarely in each end's basket. She smiled at the foreign stranger, leaving that image of her, imperishably, through Layma's lens.

"It was a lovely surprise" to be in touch with Yang once again by having a live video-chat, said the 59-year-old photographer.

"Carrying children with a bamboo basket is our custom. I didn't feel anything special about it back then," Yang told Xinhua in a tea field of Tangchao village, Guangxi.

"This man looked really different from us Chinese when he suddenly appeared," she said, noting that she remembered the two boys were so thoroughly stunned by his appearance that they broke into a short wail.

Recalling his last visit in 2018 to a Dong community in Guizhou province, Layma said he was impressed by its rapid development and current efforts to preserve local ethnic culture.

"I have taken hundreds of thousands of photos illustrating the daily life of China in many regions, anything that can illustrate its specificity and the changes," said the photographer.

Layma was among a handful of Western photographers who came to China around late 1970s, when the Asian country started to initiate its reform and opening-up. For the following decades, he traveled across urban and rural China, revisited many places to document the country and its people, yielding 600,000 pictures illustrating the profound changes in the lives of the Chinese people.

He recalled that in 1988, it took a whole day of bumpy driving and trekking to visit a Dong village from the nearest township. His foreign looks became a curiosity of the whole village, and the photos he took in the Dong community caught no less sensational attention back in France, according to the photographer.

With extensive networks of highways and railways built around the Dong community, especially since 2000, tourists from other provinces in China and around the globe increasingly frequented the region. Yang's children can now greet foreigners who enjoyed a more comfortable trip.

Recalling one of his revisits, Layma said "the hotel was big and nice. Thirty years ago, there weren't really decent hotels there for travelers."

As a photographer, Layma has paid extra attention to the preservation of the Dong ethnic culture. He said that the region has made efforts in preserving the ethnic clothing and wood architecture, as well as the Dong singing, or Kam Grand Choir, a polyphonic singing added to the World Intangible Cultural Heritage List in 2009.

Layma is proud of the photos of Yang and the wooden buildings, which have allowed more people to learn about the small village. "Great changes have taken place in the region, and I am very happy to see their lives have improved," he said.