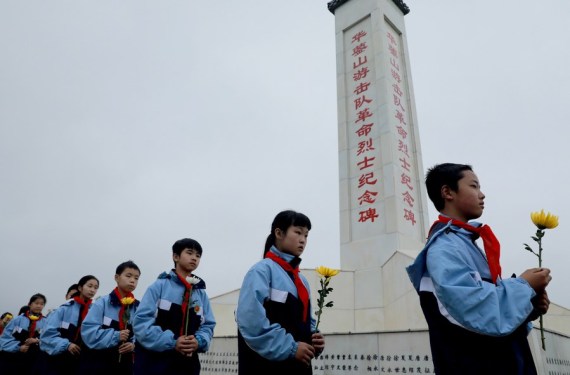 Beijing, 4 April (2021) - During the ongoing Tomb-sweeping Day holiday, Chinese people pay tribute to the deceased, including the revolutionary martyrs who sacrificed their blood and lives for the nation. The spirit of the martyrs inspires the country to realize national rejuvenation.

The Chinese nation is a nation that worships heroes, makes heroes and has numerous heroes in its history.

From the Nanchang Uprising to the fighting in the Jinggang Mountains, from the extraordinarily formidable Long March to the Chinese People's War of Resistance Against Japanese Aggression, and from the Chinese People's War of Liberation to the War to Resist U.S. Aggression and Aid Korea, it was the lives of revolutionary martyrs that ensured the success of the revolution.

The wars have tested the will, courage and strength of the Chinese people and highlighted the resilience of the nation in overcoming major challenges. Many patriots have displayed their heroism through fearlessness in the face of violence and fighting to the end, as well as tenacity and perseverance in overcoming challenges and the firm faith in victory over all difficulties.

This spirit of heroism is a valuable treasure in an age of peace. China is closer than ever to realizing the rejuvenation of the Chinese nation, but it is also facing both foreseeable and unforeseeable risks and challenges on the road ahead. It is important for people to seek inspiration from the past and draw lessons from history as weapons to overcome hardship.

The Communist Party of China (CPC) has launched a campaign on Party history learning and education among all Party members. The campaign comes in a year when the CPC is set to achieve its first centenary goal, the complete building of a moderately prosperous society in all respects, and embarks on a journey toward the second, which is to fully build a modern socialist country. Learning the lessons of history will help the CPC improve its capacity to lead and govern, and to withstand various risks at home and abroad.

The Chinese people love peace, advocate justice and long for progress. They will continue to deepen their exchanges and cooperation with all peace-loving people across the world.

By the same token, they will never allow any individual or any force to jeopardize their peaceful life and right to development, obstruct their exchanges with other peoples, or undermine the noble cause of peace and development for humanity.