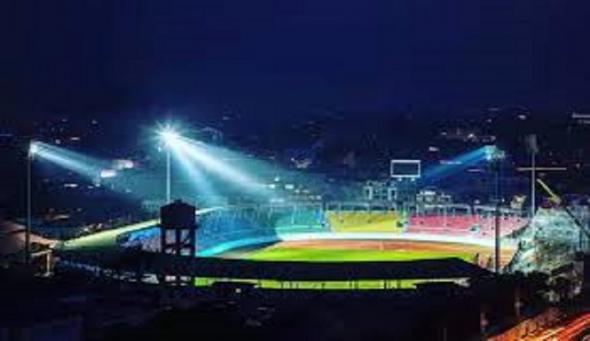 Biratnagar, 6 April (2021) - The desire of Biratnagar folks to watch night sports has materialised with the installation of floodlights at the local Sahid Maidan Stadium.

Biratnagar is the second place installing the floodlights after Dasharath Stadium of Kathmandu.

Inaugurating the floodlights on Monday evening, Chief Minister of Province 1, Sherdhan Rai, said that the government has completed its works as per the commitment made before three years.

It would be easier to organise national and international sports championships in the area after the operation of floodlights, he added.

Similarly, Minister for Social Development of Province no 1 government, Ushakala Rai, stressed on discipline through the medium of sports.

Secretary at the Ministry, Govinda Bahadur Karki, shared that the four floodlights were installed at a cost of Rs 54.2 million of the Province 1 government. Twenty-seven bulbs of 1,000 watts have been installed.