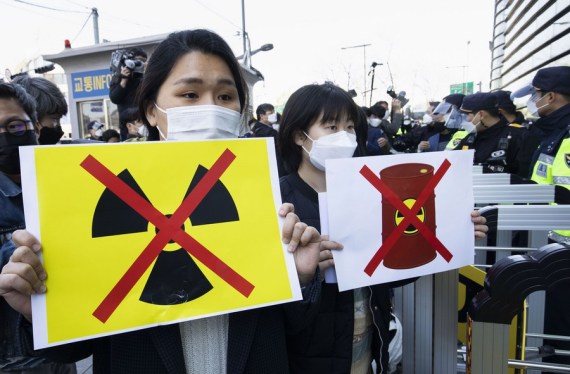 Blue House spokesman Kang Min-seok told a press briefing that President Moon Jae-in instructed secretaries during an internal meeting to actively review referring Japan to the International Tribunal for the Law of the Sea for Tokyo's decision to dump the contaminated water into the ocean.

The review would include seeking a provisional injunction from the tribunal, Kang said.

The instruction came before Moon met Koichi Aiboshi, Japan's new ambassador to Seoul, at the presidential complex to receive his credentials together with new ambassadors from Dominican Republic and Latvia.

During the meeting, Moon told Aiboshi that South Korea has a "very great concern" over Japan's decision to dump the radioactive wastewater into the ocean as the country is geographically closest to and shares the sea with Japan.

Moon asked Aiboshi to convey his message and the concerns among the South Korean government and people to the Japanese government.

The Blue House spokesman described Moon's remarks, made during the credential ceremony, as "extremely unusual".

According to the Blue House, the office of a presidential secretary for legal affairs began to review various options, including the tribunal injunction against the Japanese decision.

Japan announced its plan Tuesday to discharge the tritium-laced water from the Fukushima nuclear plant, believed to reach more than 1.25 million tons stored in tanks, into the ocean in about two years.