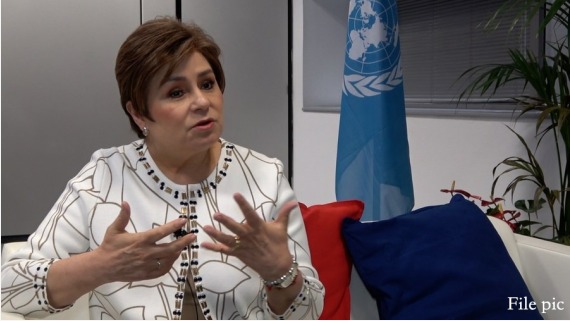 Berlin, 30 April (2021) - As a developing country with a huge population and loads of socio-economic priorities, China has demonstrated great courage and strong commitment in its climate goals and efforts, Patricia Espinosa, executive secretary of the United Nations Framework Convention on Climate Change (UNFCCC), has said.

China champions global climate actions in such aspects as technology-based advancement of renewable and clean energy, ensuring access to clean electricity in remote regions, and sparing no effort in afforestation, Espinosa said in a recent interview with Xinhua.

"I am very impressed by the efforts of the Chinese government in making the transformational changes towards building a green and low-carbon circular economy. It is apparent that climate actions have become the strategic undertaking in China's transition to a sustainable economic growth," she said.

These efforts have helped create policy certainty and reflect the Chinese government's determination in its policy objectives, she added.

China has remained committed to reducing the use of coal and has become a new global leader in renewable energy, showing tremendous opportunities in the energy sector, according to Espinosa.

"I am confident that with a clear roadmap and action plan, China will be able to achieve its ambitious goals," said Espinosa, adding that China's efforts will in turn contribute greatly to the 1.5-degree-Celsius targets under the Paris Agreement.

The Paris Agreement is a legally binding, multilateral agreement and "we need a just transformation that leaves nobody behind" the complete global economic and social transition to a sustainable path required by the agreement, said Espinosa.

Speaking of the principle of "common but differentiated responsibilities" that China proposed for the global climate governance, Espinosa said it is also a principle of the UNFCCC and called on all parties of the Paris Agreement to commit to it.

Espinosa said that as countries were busy grappling with the pandemic during the past year, much of the urgent work in climate remained outstanding, she said.

It is crucial to "get back on track" of the 26th United Nations Climate Change Conference, which was scheduled for November in the British city of Glasgow, she said.

"Above all, governments need to agree on the rules to implement the Paris Agreement. This critically important work can only succeed with strengthened cooperation among all nations, and especially among the major powers," Espinosa stressed.

"It is a time for leadership, courage and solidarity among global leaders, especially the major powers. It is also a time for ambition, commitment and political will to achieve the milestones that need to be achieved this year," she said.