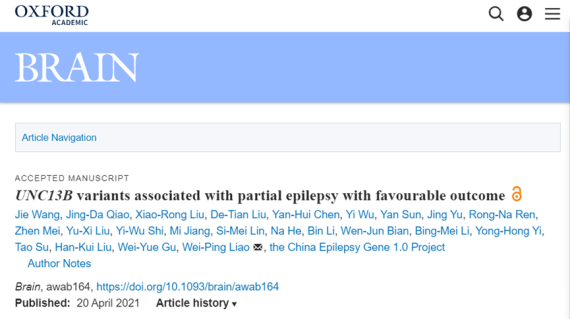 Guangzhou, 10 May (2021) - Chinese scientists have recently discovered a gene responsible for epilepsy, a neurological disorder of the brain.

The new study published in the international journal Brain described the gene as UNC13B, which has the loss-of-function variants that can cause intractable seizures and abnormal sensations and behaviors.

According to researchers, in some patients, partial epilepsy has variable causes such as trauma, infection, immune abnormalities or neoplasm. However, in most cases the cause was previously unknown.

Further analyses in the study showed that all patients with the UNC13B variants had favourable outcome after treatment, indicating that partial epilepsy caused by the gene variants can be clinically managed with antiepileptic therapy, said lead researcher Liao Weiping.

Since the genetic causes of partial epilepsy were previously undetermined, the finding may also provide scientists new thoughts to understand the origination and development of epilepsy, Liao added.