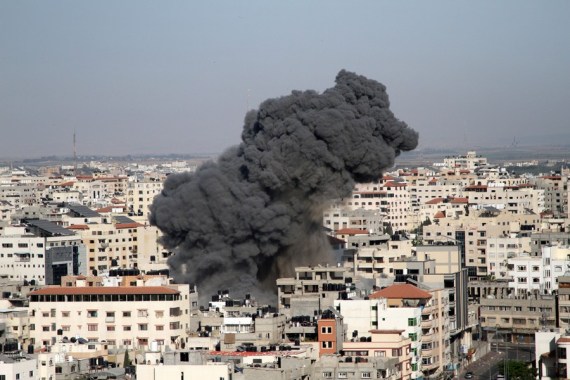 Brussels, 20 May (2021) - Concerned about the deteriorating humanitarian situation and mounting hostilities in the Palestine-Israel conflict, the European Union (EU) has urged "the immediate cessation of all violence and implementation of a ceasefire."

Representing 26 member states, the EU has made such a clear-cut statement, which highlighted outsiders' concern and lent a new urgency to political dialogues over the Palestine issue.

The High Representative of the European Union (EU) for Foreign Affairs and Security Policy Josep Borrell speaks at a press briefing after the EU foreign ministers' video conference on the Middle East situation at the EU headquarters in Brussels, Belgium, May 18, 2021. (European Union/Handout via Xinhua)

The worst conflict between Palestine and Israel since 2014 has lasted for over 10 days. More violence within the occupied territory made the Jews feel more threatened while several Arab hospitals, including a main COVID-19 testing center in Gaza, were damaged.

The suffering of both sides sheds light on the appalling years-long political stalemate on the Palestine issue.

In recent years, conflicts of different scales between the two sides have never vanished since the Palestine-Israel peace talks reached a deadlock due to the contentious expansion of Jewish settlements.

It is globally recognized that both Palestinians and Israelis are eligible to live in the region around the holy city of Jerusalem, a status quo brought by complex historic and religious factors dated back thousands of years.

Though the two peoples are both keen for a lasting peace, they have felt their respective frustrations -- failed nationalist aspirations for Palestinians and shattered absolute security for Israelis, making their common eagerness a long shot.

In history, the closest moment to such a peace was when the "two-state solution" was presented and accepted by both sides in the 1990s, with concrete support from the international community, including key Arab countries and the Middle East Quartet.

At the moment, it is imperative that the international community once again show resolution and solidarity to strengthen efforts to mediate between the two sides so as to de-escalate the conflict.

An immediate ceasefire is the top priority. And then adequate humanitarian assistance should be delivered to the enclave Gaza Strip, thronged with thousands of the injured and tens of thousands of refugees in want of water and food.

Only the hostilities decrease to a certain level can it be possible to relaunch peace talks. The Middle East Quartet, as well as the United Nations, need to play a bigger and positive role in not only brokering a temporary truce but pushing for a long-term political process.

Unfortunately, the United States, as a permanent member of the UN Security Council, repeatedly blocked the UN's efforts to make a unanimous voice on the Palestine-Israel conflict.

Given the great disparity in national strength between Palestine and Israel, it is hardly possible for the two sides to negotiate a fair and equitable deal all by their own.

Therefore the international community needs to lend sufficient support for members of the Middle East Quartet, key Arab and international partners to make every endeavor to bring the Israeli and Palestinian leadership back to meaningful negotiations, making the two-state solution viable.

Realizing lasting peace in the Middle East is probably one of the hardest nut to crack for the international community. Only by accommodating the interests of all parties on the basis of a fair and just standpoint can a solution be accepted by all the parties involved.

Political process will be time-consuming and arduous, but it is the only practicable path to a final resolution to the long-lasting problem.