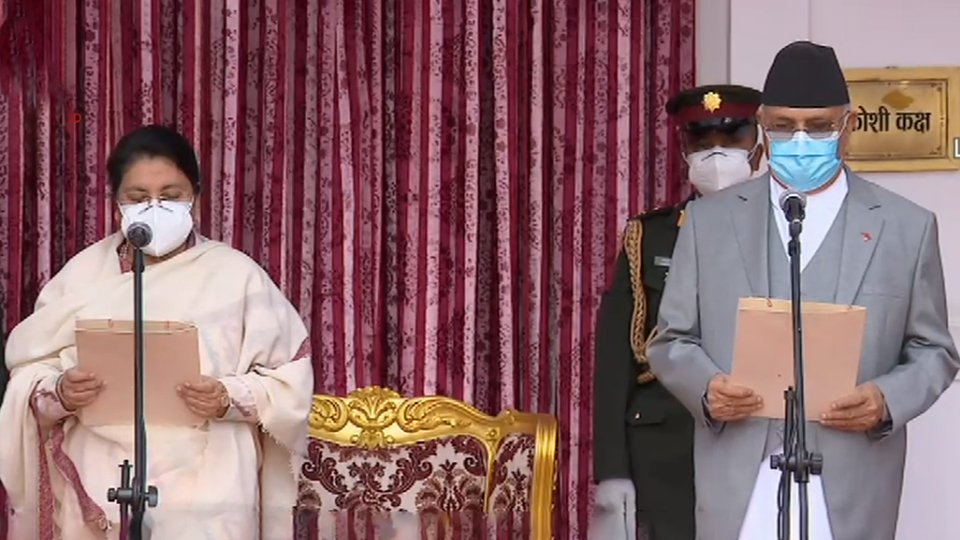 All bad things happen on Friday mid-nights in Nepal. May 21 also turned out to be another black Friday. Early next morning, with the relaxation of Covid lockdown, Nepali people came to know of midnight conspiracy hatched by the Madam President at Sheetal Niwas in connivance with the Mister Prime Minster at Baluwatar. Literally, PM KP Sharma Oli has turned Nepali politics into a duopoly.

This duo dissolved the parliament that got reinstated by the Supreme Court in February, and called for early elections in November, totally ignoring humanitarian crisis the country is undergoing due to global coronavirus pandemic. Immediate reactions from the political leaders in opposition were sharp and blunt. Some called it outright trashing of the Constitution, others called it a “gang rape of the Constitution”, more calling it to be “Regression 2.0”, and still more saying “this will lead the country into a black hole”.

The statement issued after a joint meeting between five political parties next day has called the midnight move to be “unconstitutional, undemocratic, discretionary, autocratic and regressive” and determined to wage “legal and political battles” to the end. The move has led to a situation of extreme political polarization, similar to the one observed during Jana Andolan II in 2006/7. It's basically either-you-are-with-us-or-against-us situation.

Probably, as a strategy to harass the opponents through time-pressure, the Madam President issued a notice to make claims for the government within a day – to be precise within 21 hours of notification, Friday 5.00 pm. Who knows a short notice could have been designed to keep off possible Court decrees? On Fridays, normal working hours of the courts is from 10.00 am - 2.00 pm. Moreover, a dozen writ petitions are pending at the court, related to PM’s faulty oath taking. Activation of these petitions could suspend his appointment process. The attempt to retroactively correct the situation through issuing an ordinance already reflects the gravity of the pending cases.

The opponents should have sensed the plot from the way a short notice was issued. They failed to take a note of this, rather they kept busy garnering required majority to make their claims. It is unconstitutional to look for an alternative PM without, first, a sitting PM resigning. PM Oli has no choice between resignations and facing vote of confidence. Instead he opted not to face mandatory vote of confidence and recommend the President to look for next PM under Article 76(5).

On Friday, in the meeting with the journos, the PM reiterated that there is no need for him to resign. He even went further saying it is at his discretion to face or not to face vote of confidence in the parliament. It is constitutionally mandatory for any government formed under Article 76(2), 76(3) and 76(5) to face vote of confidence, within 30 days, in the parliament, from the date of appointment.

Earlier on May 13, when he switched from PM under Article 76(2) to Article 76(3) he did so without resigning; he is claiming the same process to apply when switching from Article 76(3) to Article 76(5). There is no such word like resignation in PM Oli’s dictionary. In February, when the Court overturned his decision to dissolve the parliament, he did not bother to resign. Instead, he held on to power claiming he has “additional duties” to implement the court order.

Definitely, seemingly never ending ongoing political imbroglio must have led many to believe that elections are the only sensible way out. However, given the humanitarian crisis that is currently faced by the country due to the global pandemic situation, holding elections in November is a near impossible task. PM Oli may cite the cases of the US and India holding elections during pandemic situation. But comparison of Nepal with USA and India is a stupidity in itself. How can a country which is not even in a position to hold elections without some foreign support can compare with itself with the US and India?

The real motive behind parliament dissolution is not to have elections but to hold onto power as long as possible. This is evident from the way recent appointments have been made into constitutional bodies and diplomatic missions. For the sake of power this man is designed to wreck anything. He can sell nagarikata (citizenship), release prisoners, trample on the constitution, sell jingoism, play with Hindu religious card, and distribute state largesse to his followers and supporters. Quixotic behaviour of this man has brought the country to a state of shame and laughter.

Remember how he baffled even PM Narendra Modi of India when in a distant meeting between South Asian leaders on controlling Covid-19 last year, claimed “Culture of Namaste” as an extension of our age-old practice of social distancing. His other frivolous comments on controlling Covid-19 have been reduced to a national joke. As long as we keep this “jack-of-all” in power, the country will continue to move in a reverse gear.