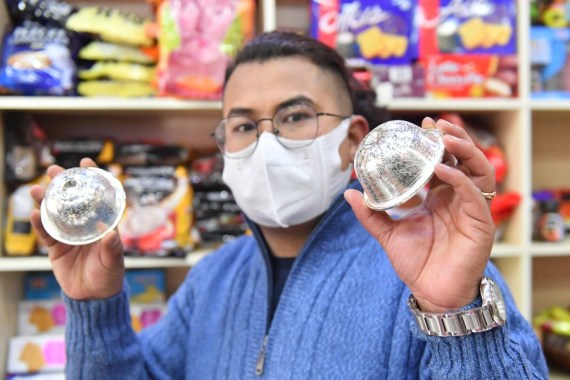 Lhasa, 26 May (2021) - Tsering Pema Lama is from a small Nepalese village near the China-Nepal border. He now manages two businesses in Gyirong County, the city of Shigatse, southwest China's Tibet Autonomous Region.

The 21-year-old spends most of his time in the shop selling Nepali products, and occasionally visits his restaurant when it is busy.

Lama moved to Gyirong in March 2020, when China was fighting the COVID-19 epidemic. He intended to take care of his family business as his parents had returned home for a holiday.

Over the past year, Lama, along with many other Nepalese people, has witnessed China's effective control of COVID-19, as well as the friendship between China and Nepal.

Lama underwent a two-week quarantine after entering China. The border port was closed soon after his arrival, and his parents remain unable to return.

"I feel safe here as only a few cases were logged recently in China," he said. In contrast, Nepal has been hit by a surge of new infections since April.

By Tuesday, there had been more than 520,000 confirmed cases in Nepal, with the single-day number of new cases on Tuesday surpassing 7,200. The virus has claimed 6,531 lives in Nepal, according to the World Health Organization. Since late April, most areas in Nepal have been taking strict measures to contain the outbreak, including travel bans.

Gyirong County has strengthened its border control to prevent possible imported cases. There are approximately 60 Nepalese nationals living and working in the county, and local authorities visit them regularly to learn about their needs and provide medical and other necessary services.

"I closely follow the pandemic situation in Nepal and hope that my parents will be as safe as I am," said Lama.

His parents first came to China about 20 years ago, peddling vegetables and Nepalese products. They opened a store in 2013 and, two years later, they opened their restaurant.

"I've been to Gyirong several times over the past two decades. I have many regular customers and friends here. Gyirong has become my second hometown," said Lama.

During peak tourist seasons, his two stores can bring in more than 10,000 yuan (1,554 U.S. dollars) per day, while business usually falls in the winter.

"There are fewer visitors this year due to the pandemic," he said.

Tamang's two children are still in Nepal and are cooped up under strict COVID-19 control measures. "I'm really worried about them and hope the pandemic will end soon," he said.

He is impressed by how China curbed its epidemic. "The measures are well implemented and everyone wears masks in public," said Tamang, adding that he believes these measures were important to containing the virus.

"The port has since delivered 20,000 tonnes of goods with a value of approximately 1.1 billion yuan to Nepal. The value of daily necessities and anti-COVID-19 materials delivered to Nepal has surpassed 3 million yuan during the period," said Dachun, Gyirong's deputy Party secretary.

Gyirong has received new requests for material assistance from Nepal as the latter is seeing a rising number of new cases. Local authorities are actively organizing donations.

"I hope COVID-19 will ebb soon in Nepal with the help from China, and that the border can be fully reopened," said Lama.