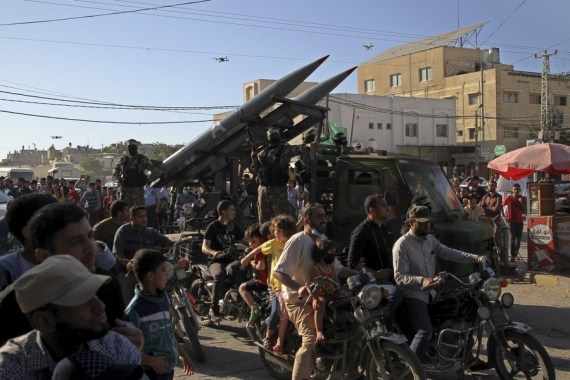 Ramallah, 30 May (2021) - The Israeli-Palestinian conflict has recently been brought back to the global fore from several years of marginalization, especially during and after a 11-day-long round of the probably heaviest fighting between Israel and the Gaza Strip's ruler Hamas since 2014, according to Palestinian analysts.

The analysts agreed in separate remarks they made to Xinhua that a new path that leads to a comprehensive solution based on the vision of the two-state solution on the 1967 borders is in preparation with the mounting tension between Israelis and Palestinians.

On May 15, the sixth day of the Israel-Hamas fighting, Palestinian President Mahmoud Abbas held a phone call with U.S. President Joe Biden. Before long, the foreign ministers of Germany, the United States, Egypt, Jordan and Britain successively visited Ramallah and held talks with Abbas in hopes of de-escalating the regional tension and bringing the peace talks back on track.

Nabil Shaath, a diplomatic aide to President Abbas, told Xinhua that the Palestinian leadership has stressed to U.S. Secretary of State Antony Blinken the necessity of ending the political vacuum that led to the growing tension in the region.

"We believe the United States has to pressure Israel to show goodwill gestures about a real opportunity that Washington can use together with Arab and international states to resume the peace process which had been stalled for seven years," Shaath said.

The current high tension since April, as most previous cases, started in East Jerusalem as Israel insisted on evicting 28 Palestinian families from their homes in Sheikh Jarrah neighborhood, and then expanded to the West Bank and the Gaza Strip, until Hamas fired a barrage of rockets toward Jerusalem on May 10 that led to an immediate major air offensive on Gaza from Israel.

Abdulmajid Sweilem, a political analyst from the West Bank city of Ramallah, said the Palestinian issue mainly includes the status of Jerusalem, settlement expansion in the West Bank and the Israeli blockade imposed on the Gaza Strip.

"The latest event leads to the unification of the Palestinian people in an unprecedented way over the past two decades," Sweilem noted. "No one under this unity can withdraw from calling for a just and fair solution based on international legitimacy."

Former U.S. President Donald Trump recognized Jerusalem as the capital of Israel in late 2017 and then presented a so-called peace plan for resolving the Israeli-Palestinian conflict, better known as The Deal of the Century. The Palestinians categorically rejected his deal and severed ties with the United States.

Meanwhile, Abbas presented a peace initiative before the United Nations Security Council, which included a call for holding an international peace conference. However, his initiative was opposed by Israel and the United States.

The last Israeli-Palestinian peace negotiations, sponsored by the United States, continued for nine months and broke down in the spring of 2014.

"There is now a significant change in the attitudes of the United States, which starts to adopt the vision of the two-state solution abandoned by the former administration of President Trump for four years," Haytham Daraghma, a political analyst from Ramallah, told Xinhua.

"Following the mounting tension in the Palestinian territories, Washington reached a conclusion that it is impossible to bypass Palestinians' legitimate right of establishing an independent state on the 1967 borders with East Jerusalem as its capital," he noted.