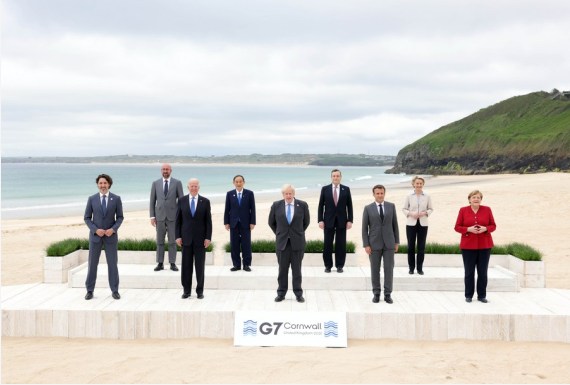 Beijing, 14 June (2021) - At their just concluded gathering, an exclusive club of wealthy developed economies has once again shown to the whole world their so-called "common values" are no more than deeply-entrenched ideological prejudice and sense of arrogance.

In a joint communique issued Sunday by the leaders of Group of Seven (G7)  after their three-day meeting in Cornwall, Britain, they grossly interfered with the internal affairs of China on issues concerning Xinjiang, Hong Kong, Taiwan and others.

And for some parts of the statement in which they elaborated on so-called initiatives to boost global development, for example a special infrastructure plan, the end goal is still to counter China.

It turns out that this group of developed countries is hardly developed in its way of thinking.

The age of Cold War has already gone 30 years. Yet it seems that such a zero-sum mentality still prevails in the capitals of some nations. And it seems that some of the decision-makers of those countries still refuse to wake up from their imperial colonial dreams.

As some of the world's wealthiest countries, what they should have done in this utterly challenging era is to rally consensus globally for ending the still-raging pandemic as soon as possible and sustaining a steadfast global economic recovery.

However, it seems that the G7 members are only interested in highlighting differences, and prompting conflicts among members of the international community.

So instead of unabashedly pointing an accusing finger at China, the group could have put more time and energy into addressing its own problems at home, for the sake of the well-being of its own people.

Perhaps most importantly of all, the 48-year-old club, which touts itself as a high-profile venue for discussing solutions to major global challenges, could have added some real actions to its ballyhoo.

The world will see whether the group's pledge on vaccines, on more economic support for developing countries, and on climate change, can be put into practice, or are merely lip services.

The world will also find out whether the group's promise on infrastructure investment to low- and middle-income countries involves sincerity in helping those countries, or is simply geopolitics at play.

Considering their disappointing track records of keeping promises, it does not look promising this time either.

This is an age of collaboration. The era when a small number of countries can control the destiny of the world and dictate global agenda is just history now.

If the club really cares for securing a better future for the planet, as it claimed in the joint communique, it should start by discarding its China-bashing cliches, and thinking about what best suits the developing interests of the world at large.