Ahead of the England duel, Germany continuous its finding process 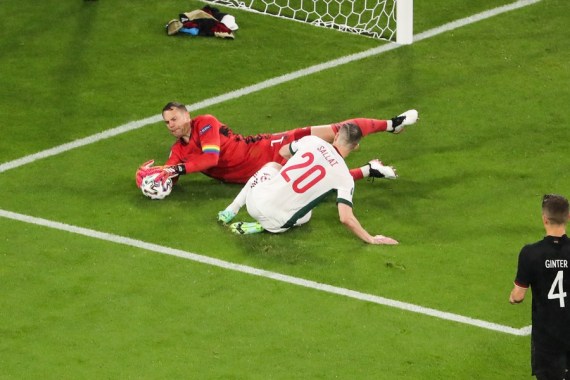 Berlin, 24 June (2021) - After one of his most challenging games, Joachim Low turned into a pragmatic analyst.

"A tournament is about surviving your group, especially when you face one like ours. It was the tournament's hardest," the 61-year-old said after a nerve-racking 2-2 draw against underdog Hungary in Germany's third Group F encounter of the Euro 2020.

After a narrow defeat against 2018 World Champion France (1-0), a brilliant win over 2016 European Champion Portugal (4-2), and a difficult draw against Hungary, the 2014 world champion surprisingly made his way to the round-of-16 as the second.

"We have shown a great spirit and an unbreakable will to get things done no matter how hard our task is," Low said.

Before facing England at Wembley on Tuesday, Low talked about "one of the hardest games I can think of against a determined Hungarian team that made things difficult for us, France and Portugal."

The duel against England will provide much more space for his side Low insisted after a relatively poor performance in defense, allowing Hungary to score the lead twice.

"We have to improve and do better," the German coach stated. Low spoke about three completely different performances.

From now on, it's do-or-die for Germany, Low added. "We know we have shown all possible ups and downs, and we need to gain more stability. But we know group games now are a thing of the past."

The most pressing question keeping Low's and his player's mind busy seems: Where do we stand after the group stage?

Joshua Kimmich described the team's mental state somewhere in the uncertain. "We didn't show courage in the first. We delivered a great thing in the second and the third is a mood damper," the 26-year-old said.

What makes him optimistic is England's approach to playing games more open than Hungary. The Bayern midfielder spoke about "an entirely different game ahead."

It might sound strange, "but I am very much looking forward to it." His side has to try to run games without always conceiving a goal.

Manuel Neuer tried to ease tensions by drawing a positive picture. "We do better against advanced teams. Wembley is a place where we have delivered several successful games," the goalkeeper said.

Despite a lot of forced optimism, Low's team remains a building site for the coach departing after the major after 15 years in charge.

In his last tournament on the German bench, Low has decided to gain as much success as possible, even if it was the bumpy way.

Having to replace slightly injured Thomas Muller, Leroy Sane turned into a disappointment. Midfielder Kimmich seems uncomfortable with his job along the flanks, while Kai Havertz and Ilkay Guendogan are still far from expectations aside from an insecure back-row.