Duel to the death 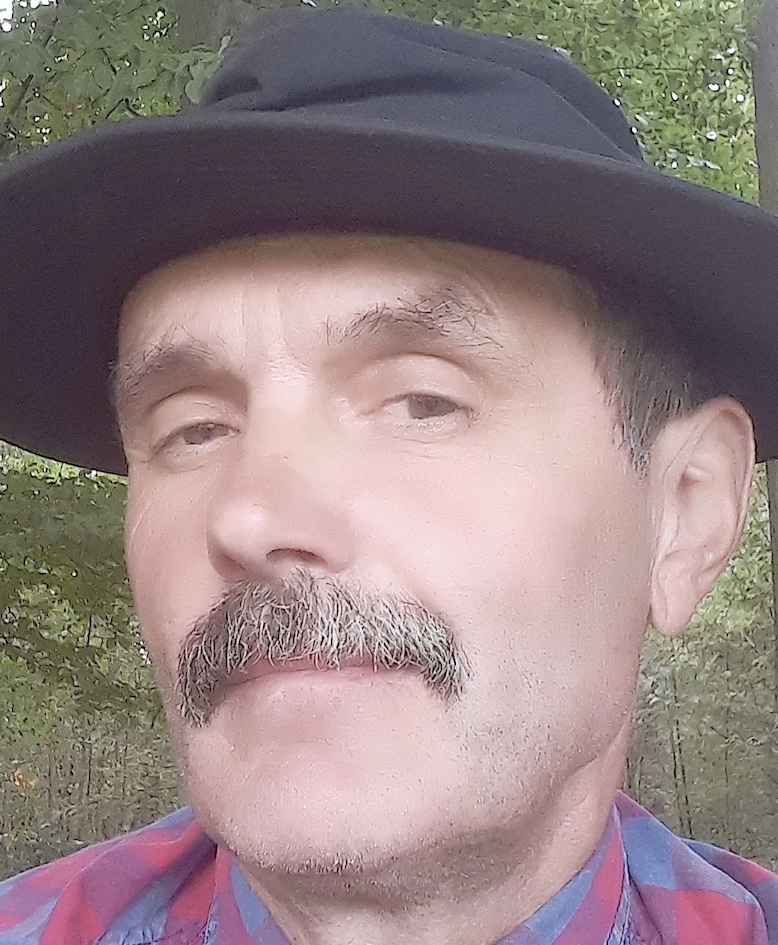 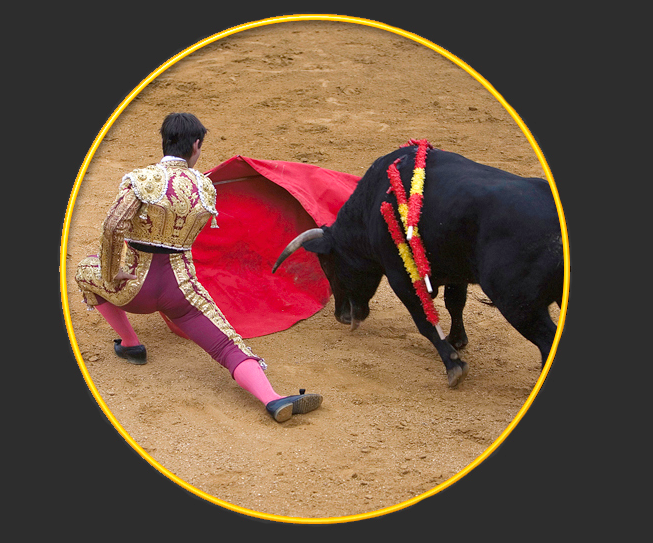 The noble Spaniard may sometimes forget the names of his country's ministers but it will be a shame not to know the venerable matadors like Jose Maria Manzanares (14.04.53) who could coldly turn his back on a nearby bull just to get the public Ole.

Many of them are no longer in the arena. However, there are still vivid memories of them.

It is a fiery Spaniard who, endowed with uncontrollable fighting spirit and accompanied by the Andalusian guitar, is ready for everything in front of his beloved audience.

They loved their work  and realized that today's show might be their last.

The presidium gives a hint with a white scarf and the show can begin. With a glorious parade paseillo, the arena enters  participants of the show. Accompanied by two horses, respectable and experienced matadors walk in the front row. And as it should be, for the sake of defense, less experienced comrades, toreros, march under the siege of experienced matadors. 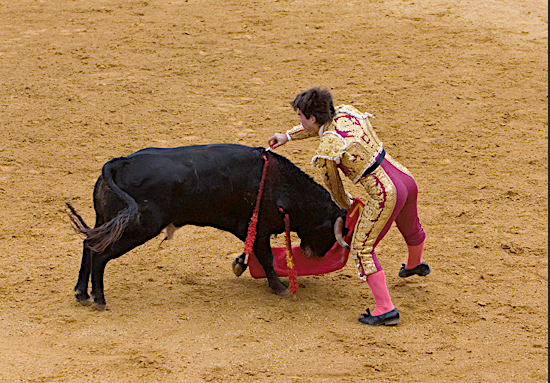 Behind them, the line is formed by banderilleros, followed by picadores, mullileros and areneros, each with its own different costume. When all the guards have entered the arena, it solemnly stands in front of the presidium. During the procession, if a previous fight of some matador has been particularly successful, then the latter are greeted with stormy applause from the public. Whistles are also addressed to the losers, but they are usualy kept in an exhilarating tone.

After the official reconnaissance ceremony, participants gather at the fence of the arena.

Meanwhile, the riders separate from the guard and in a graceful rickshaw approach the gate to the man at chiquero who is responsible for bringing the bull into the arena and ask if everything is ready for the show. If the answer is yes, the president of the arena is notified.

Accompanied by trumpets and drums, the president with a white scarf gives a second hint, making it clear that permission is allowed to bring a bull into the arena. At this point, everyone's eyes are on the chiqueros, and the moment they open, there is complete silence in the arena. Matador's assistant Torero is the first person to face the bull. His task is to provoke a bull with a bright red piece of canvas. This is an important foreplay of the show and its intention is to evaluate the behaviour and character of the bull. The members of the fight carefully analyze each movement, his reaction to different types of provocation. Only experienced matadors are able to imagine the outcome of the struggle in advance, which is their secret.

After this foreplay, the first matador enters the arena and with a gorgeous gesture veronica directed at the president, begins the main part of the show.

The president makes the next hint and the picadores enter arena. This process is always accompanied by music. Their task is to cut the banderillas in  bull's back, thus tiring the bull. If both swords are cut in one go, it causes a standing ovation from the public.

It is a real dance of death, skillfully hand-guided. Gorgeously decorated swords with a jump in a graceful gesture strike the scalp. And so it continues, until the animal is completely bled and exhausted. A breathtaking duel of life and death is approaching its climax. By throwing a  challenge, it is determined who will leave the arena as a winner.

According to the rules, the matador himself must cut three banderillas. 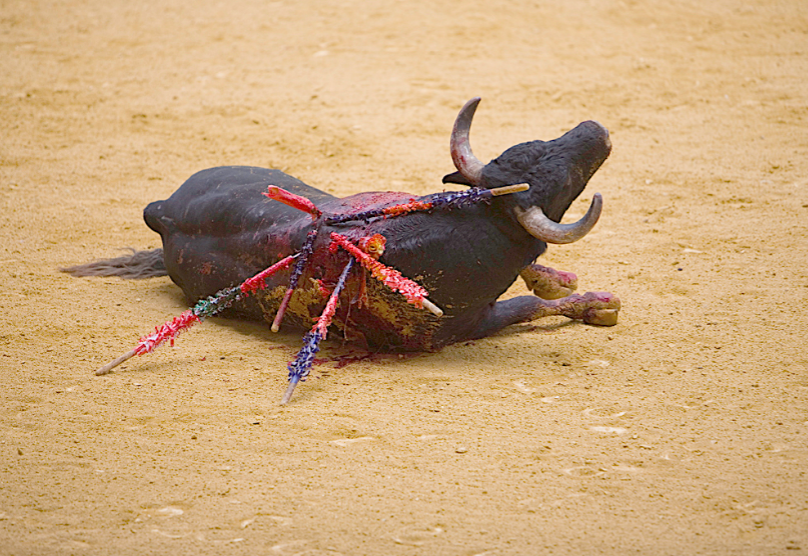 Bull's annoyance takes up most of the show. When the animal is thoroughly exhausted, the president gives another hint with a scarf to kill it. In the noble course, the matador approaches the presidium and exchanges his sword for the final battle.

And so, the last part of the show begins. Public applause subsides.

There, in the center of the arena, two lives freeze for a moment to look into each other's eyes... saying who wants to live and who wants to win. It's a centuries-old fighting game whose constant answer is that someone will have to go, but someone, will get a public ole.

A few more moments and the matador moves to attack. He knows well where to stub the sword. It is a small cavity in the bull's forehead. At this point, all forces must be concentrated, because a small mistake could turn into a great tragedy.

Ten minutes are given to kill the bull. If the matador is not successful, then, on the instructions of the President, an additional three minutes are given. If even then the fight is not successful - another two minutes. After the third unsuccessful approach, the fight is not allowed to continue and the bull is taken back to the stable. For Matador, it is a shameful process, usually accompanied by ridicule and whistles from the arena.

Another short break to concentrate. With the outstretched hand he is approaching the bull and with all his might hits the sword into its neck. Usually when the sword is fully inserted, it pierces the lungs and the animal suffocates in its blood. Life does not want to give up and the bull, spilled with blood, still stands for several minutes until powerlessly falling into the sand of the arena. The animal still twitches in the last agony. And then as a salvation, comes the president's last instruction to kill it. 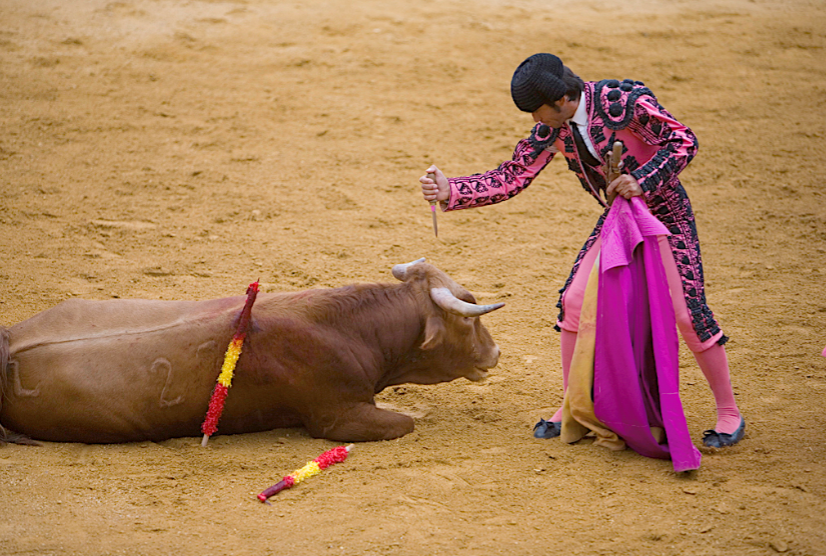 Once it is accepted, the matador's assistant stubs the puntilla in the bull's head. Just like in the Middle Ages, the severely wounded were killed after the battle.

In the event of a successful victory, the matador performs a circle of honour upon receiving a standing ovation from the public. The audience, waving white handkerchiefs, asks the president for permission to receive a gift, - a bull's ear. If the ovation hits a high wave, then, according to the president's decision, permission is given to cut off both ears and tail and present them to the winner.

When this happens, the winner shows the trophies, goes around the arena, and throws them into the audience of his choice. The main triumph occurs when fans lift the hero on their shoulders and perform a circle of honour.

Someone has to leave ... the slaughtered bull, in front of all eyes, chained, is taken away from the battlefield directly to one of the nearby restaurants.

All photos by ©Persijs Muiznieks