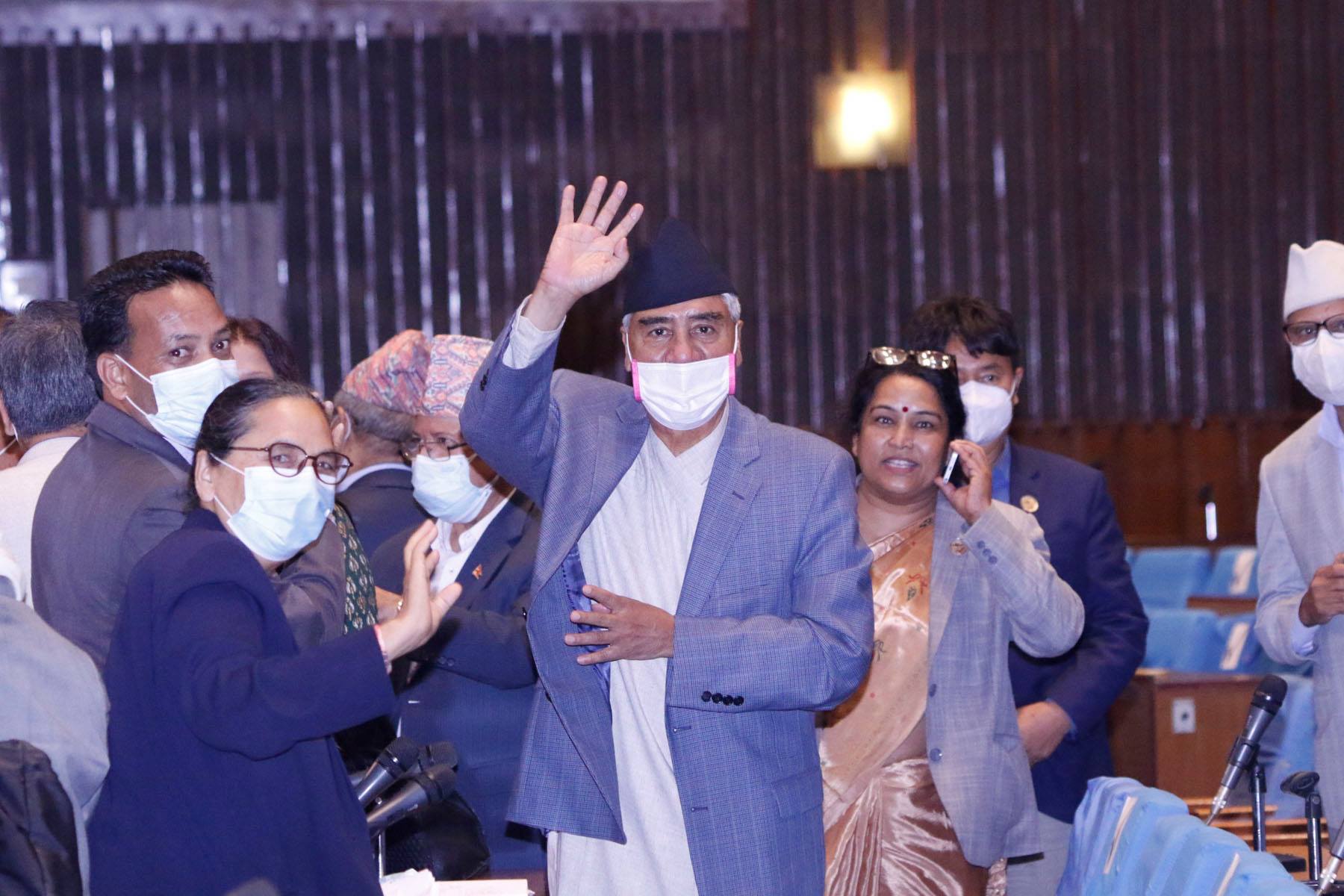 Out of a total of 149 Members of Parliament (MPs) present at the time of parliamentary floor testing on Sunday, Prime Minister Sher Bahadur Deuba got 165 votes, i.e., in excess of threshold required to remain in power (136 votes). This is more than the number of signatures he presented to the President (149) or to the Supreme Court (146) when he filed a writ petition. With a shortage of one, he scored double than that of his opponent.

If the outgoing PM Oli is not happy with voting outcomes, he needs to take a deep self-retrospection about the gradual erosion of votes in his camp. During his own floor testing, he had scored 93 votes. Now this has reduced to 83. A total of 22 CPN-UML members crossed the line and voted in favour of Deuba. Out of this, eight members defected from Oli's camp. There were 16 absentees of which, again, eight were from his camp.

Technically speaking, absent votes are not counted but when those UML MPs decided not to vote against Deuba, theoretically speaking, they are voting in favour of Deuba. All of the members in Thakur-Mahato Camp of Janata Samajwadi Party (JSP), expected to side with Oli, made their last minute switch. This did not come as a surprise. As reported in the media, as soon as voting results were declared, Indian PM Narendra Modi turned out to be the first foreign dignitary to tweet Deuba with a congratulatory note. There is a meaning in the message and in the medium.

Oli camp may not have been totally isolated, but definitely, it is being gradually isolated. I would use the term ossified. If Oli cannot read this simple message in his political dashboard, he is going to be a force spent. His last minute entry into the parliament, a moment before warning bells rang inside the meeting room, gave an impression of a late comer student not being able to bunk the class, finally joining the class. He surprised himself than surprising anyone inside the parliamentary session. MPs belonging to Oli camp must be thanking the pandemic situation because the face masks had allowed them to hide their shame. Just watch the faces of Messrs Gyawali and Nemwang.

PM Deuba’s move to test floor on the same day the parliament is restored is thought to be a smart move. Earlier, he made public that he will soon go for floor testing but later withdrew his statement saying “it might take some days”. He was supposed to secure vote of confidence within 30 days from the date of his appointment. In a way, he had more than enough time to secure confidence votes. His abrupt, secretive and pre-emptive move to go for confidence votes could be verified from the fact that Gagan Thapa – a Nepali Congress leader stuck in Pokhara, was to be airlifted for voting. This implies Thapa even did not know of Sunday’s confidence voting.

The greatest surprise came to the CPN-UML Young Turks planning to strike a unity deal within the disputing CPN-UML camps. Literally, their pants were pulled open in public. That is the reason why so much angst could be read in their faces. They walked over and remained absent at the time of voting. As a protest move, Bhim Rawal even tendered his resignation from parliamentary membership position. However, this could be nothing more than a stunt to draw public attention.

An online news media reported that Deuba had conceived this idea on Friday when four parties to the alliance had a meeting at Singha Durbar. The actual voting strengths were calculated and when he received signals from the JSP Yadav faction that more members from JSP Thakur Mahato faction are joining the Yadav Camp and similarly some members from Oli camp joining Nepal camp.

Earlier, there was news that the former Minister Prem Ale from Oli camp secretly met Deuba at his residence, assuring a ministerial berth for himself in lieu of support from him and his coterie of 7-8 MPs. Ale termed this a fake news but he did cross the floor at the time of voting. We still have to see whether he will be rewarded with a ministerial berth.

Deuba may look like a simpleton but he turned out to be a strategist. There is a saying, “one has to strike when the iron is hot”. A day’s delay in confidence voting could have turned things upside down. Already there were moves to isolate Madhav Kumar Nepal and in the name of CPN-UML unity there were moves to oust Deuba and to exact a vendetta on court verdict.

Even after securing confidence votes, PM Deuba’s difficulties are not over. Literally, he is in a situation of trilemma: He has to deal with three viruses simultaneously - communist virus, coronavirus and corruption virus. First, he has to flush out the shit left by Oli. This includes cleaning the bureaucracy, security apparatus, and illegal appointments in the constitutional bodies.

Third, PM Deuba has to deal with the communist virus, that is, antagonism and rivalry between and within communist parties.

And with the upcoming General Assembly of his own party, he is short of time and overburdened with work schedules. For the moment, he has resolved, not solved, only one problem that goes by the name of Olitics-politics in Nepal.