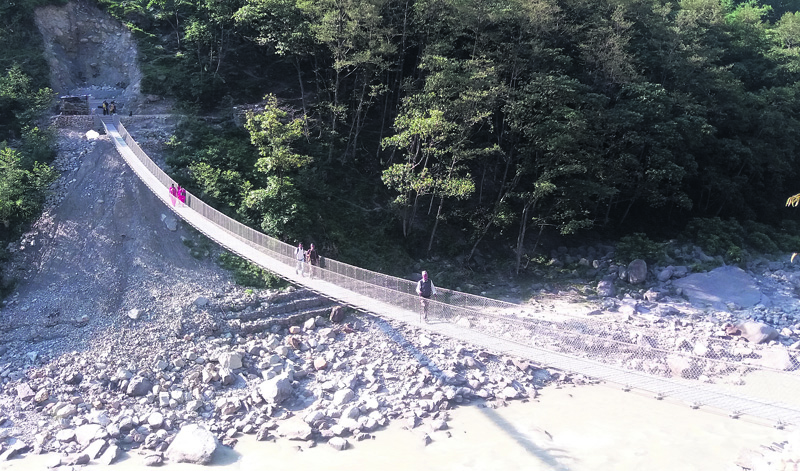 Kanchanpur, 22 July (2021) - Locals of Dodhara Chadani Municipality are facing inconvenience reaching Mahendranagar, the district headquarters, due to the dilapidated condition of a suspension bridge over the Mahakali River.

Despite this the locals have been using the bridge to reach Mahendranagar as this is the shortest route for them to reach the district headquarters.

The steel deck of the bridge is found broken due to rusting.  Similarly, other parts and joints are also found damaged. Since the nuts and bolts of the truss and angles of the bridge have rusted and become loose, the risk of the bridge collapsing is realized of late.

Suspension bridge cable is susceptible to corrosion damage in different parts. The main cables of the suspension bridge, which are composed of many wires, are usually fractured and are critical in several parts.

The Municipality mayor Bir Bahadur Sunar has shared that they have mobilized the police to control the motorbikes limitation and speed over there. They have restricted carrying of heavy weight (over 50 kg) via the bridge.

However, the bridge is to be repaired and maintained by the Sudurpaschim Province government at a cost of Rs 6 million. The longest suspension bridge (1,452m) was constructed in 2061 BS at a total cost of Rs 94 million 241 thousand.