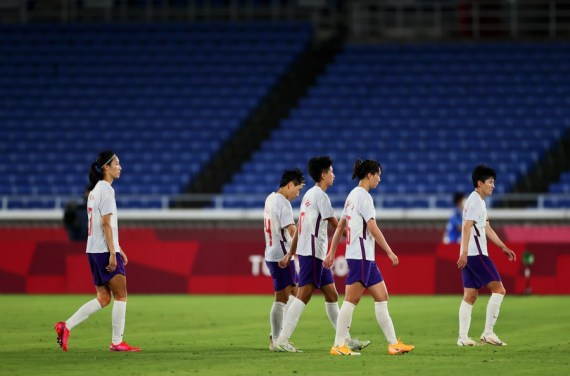 Tokyo, 28 July (2021) - There was no miracle for the Chinese women's football team in Yokohama on Tuesday evening. After another one-sided match - an 8-2 defeat against World Cup runners-up the Netherlands - the "Steel Roses" ended their journey at Tokyo 2020, with a long road seemingly ahead for the team to return to its former glories.

The match against the Dutch was not very different from the previous two group matches. China's attack was able to penetrate and score goals with some nice play in parts of the match, but the inexperienced defense simply had no way to stop the powerful runs by their opponents, and the match quickly spiraled out of control.

It has been more than two decades since China's women won a silver medal at the Olympic tournament in 1996, and there was hope that the Steel Roses might impress at the Tokyo Olympics, with spirited performances in qualifiers despite the difficulties caused by the COVID-19 pandemic, including a comeback against South Korea in a crucial play-off in April.

To the surprise of many, head coach Jia Xiuquan's side conceded a staggering 17 goals in just three matches, the most among all teams in the tournament, and ended up bottom of the group without a win.

Former Paris Saint-Germain midfielder Wang Shuang again showed her quality as a footballer, scoring all four goals in a 4-4 draw against Zambia. China also suffered with the absense of captain and Jia's most trusted defender Wu Haiyan due to injury. The Steel Roses' lack of international competition due to the pandemic should not be overlooked either.

Jia has repeatedly said he takes full responsibility for the team's dismal performance at the Olympics, but also stressed that it would take the efforts of several generations to achieve the rejuvenation of Chinese women's football.

China beat the Netherlands 1-0 in a group stage match at the 2015 World Cup, but the two teams have been on divergent paths ever since, with the Dutch side winning the European Championship in 2017 before reaching the World Cup final in 2019.

Dutch head coach Sarina Wiegman told the post-match press conference on Tuesday that she still remembered the 2015 match with China, when she was assistant coach as the Chinese side "played better than we did."

"The players have been growing since then," Wiegman said of the Dutch players. "They went to bigger clubs, international clubs like Arsenal, Barcelona and Olympique Lyonnais. They were growing as people and as football players. We built on this team, the players built the team together with us and we started to believe in our qualities. I think that made the difference."

Given the development of women's football around the world and in Asia, the Steel Roses will face even greater challenges to earn an opportunity to prove themselves again on the world stage, and return China's women's football to its former state.