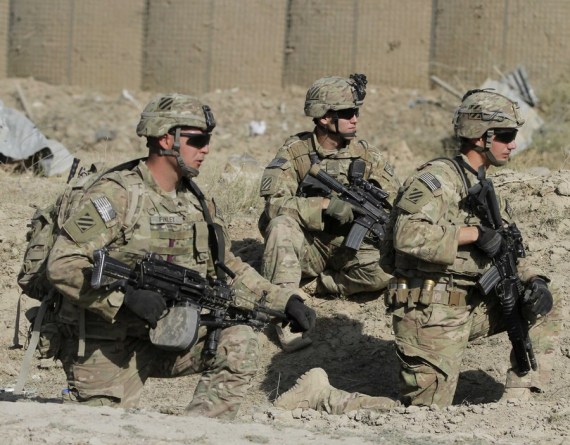 Washington, 3 September (2021) - Since its declaration of independence in 1776, the United States has been involved in warfare through most of its history. And Washington has been proactively engaged in military interventions or even launched military operations in hotspot regions worldwide over the past decades.

While there are historical reasons for the bellicosity, America's heavy reliance on military approaches over the past decades has been essentially driven by a hankering to retain hegemony in the world and vested interests of the country's influential military-industrial complex, media pundits and experts have said.

Its "war addiction", which has led to hundreds of thousands of deaths and destruction of countless homes in an array of countries, has also backfired, with casualties and tragedies among its own troops piling up amid sky-high military spending.

In early 1600s, colonists and Native Americans attempted a mutual relationship based on exchanges of goods and ideas.

However, with the influx of more European migrants, settlers stepped up violent seizure of land and resources while carrying out massacres of the indigenous. The barbaric acts, along with imported diseases such as smallpox, and famine, had radically reduced the indigenous population.

Worsened relations led to King Philip's War, also known as the First Indian War from 1675 to 1676. In the bloodiest war per capita in U.S. history, thousands of Indians were killed, wounded, or captured and sold into slavery or indentured servitude, and several hundred colonists were dead and dozens of English settlements destroyed or heavily damaged.

Thirty colonies on the Atlantic coast of North America declared their independence from Great Britain in 1776 and formed the United States of America while fighting the "American Revolutionary War." Yet the federal government did not move to alleviate the suffering of the Native Americans after winning the war. Instead, its policies motivated violent displacement and bloody killings of them.

Take the Indian Removal Act. Effective from 1830, it gave land belonging to the Native Americans to southern states. More than 46,000 Native Americans were forced -- sometimes by the U.S. military -- to abandon their homes and relocate.

Thousands of them died of disease, starvation, and exposure to extreme weather, on the forced journey in what became known as the "Trail of Tears."

There was a widespread belief in Manifest Destiny in the 19th century that the United States is destined to expand its dominion and spread its values to justify the forced removal of Native Americans and other groups from their homes, as well as its territorial expansion through wars.

"Violence is the primal problem of American history, the dark reverse of its coin of freedom and abundance," wrote U.S. historian David Courtwright in 1996.

People are seen in the rain caused by tropical storm Henri, in Times Square in New York, the United States, on Aug. 22, 2021. (Xinhua/Wang Ying)

During a speech in 2019, former U.S. President Jimmy Carter said that the United States is "the most warlike nation in the history of the world," because it has only enjoyed 16 years of peace in its 242-year history.

The root cause of America's addiction to the use of armed forces, firstly, lies in its yearning to maintain hegemony. For long, the U.S. government has pursued hegemonic policies and spared no effort to hold the global standing. Waging wars have thus been a crucial tool to that end.

The United States has no moral scruples to initiate a war, by hook or by crook. To justify their military operations, the United States has frequently hyped up the military threats posed by other countries, though it has had the world's largest and most expensive military and sought a military superiority with an obsession in arms races.

Secondly, the war addition is related to Washington's desire to export its values. Boasting of "a city upon a hill," the United States believes in so-called "American exceptionalism" and has tried relentlessly to spread its self-defined "universal values." For those countries who have different systems and values, they are more likely to be subject to military intervention by the United States and its allies.

Thirdly, the United States pursues the law of the jungle in the international arena. Since the end of the Cold War, America's strength has grown unprecedentedly dominant and become increasingly arrogant in addressing international affairs. It is habituated to resort to military means with no regard to international order and rules and with no respect for other countries.

One of the reasons that the United States "keeps fighting foolish wars" is that "it has a remarkably powerful military," wrote Stephen Walt, a Harvard University professor of international relations, in an op-ed article published by Foreign Policy magazine in 2011.

"When you've got hundreds of planes, smart bombs, and cruise missiles, the whole world looks like a target set," Walt argued.

Since the end of World War II, the United States has either intervened or waged a number of wars overseas, causing not only severe civilian casualties, but serious property damage and harrowing humanitarian crisis. Till now, many countries are still stuck in a disastrous state, and the United States itself has paid a huge price.

According to a study by Brown University, at least 800,000 people have died in Iraq, Afghanistan, Pakistan, Syria and Yemen since the United States launched the "War on Terror" after the Sept. 11 attacks in 2001. That number only includes lives directly lost "through bombs and bullets" in major hotspots, according to the study. The U.S. wars have also turned tens of millions into refugees.

More than 7,000 U.S. troops and over 8,000 contractors working for the United States have also died fighting the wars in Iraq and Afghanistan, the Brown University study showed. In addition, tens of thousands of U.S. soldiers and contractors have been injured or suffered from mental illness, many of them having committed suicide due to the post-war trauma.

In addition, the U.S. wars have brought political turmoil, economic stagnation and destitute families in many countries. The United States itself is also struggling with the massive military spending and health care for veterans.

The war addiction of the United States has not only jeopardized world peace and stability, but also harmed the interests of the vast majority of its own people. And yet America's influential military-industrial complex is profiting off the wars.

"Defense companies spend millions every year lobbying politicians and donating to their campaigns," Daniel Auble, a senior researcher for U.S. research group The Center for Responsive Politics, wrote in a report published earlier this year. "To further these goals they hired more than 200 lobbyists who have worked in the same government that regulates and decides funding for the industry."

Erica Fein, advocacy director of Win Without War, a U.S. public education and advocacy coalition, has warned, "continuing to funnel near-limitless resources into the pockets of arms manufacturers while underfunding public goods only undermines the safety of people in the United States and around the world." Since its declaration of independence in 1776, the United States has been involved in warfare through most of its history. And Washington has been proactively engaged in military interventions or even launched military operations in hotspot regions worldwide over the past decades.