Spanning four continents, a glimpse of civilizations through gold masks 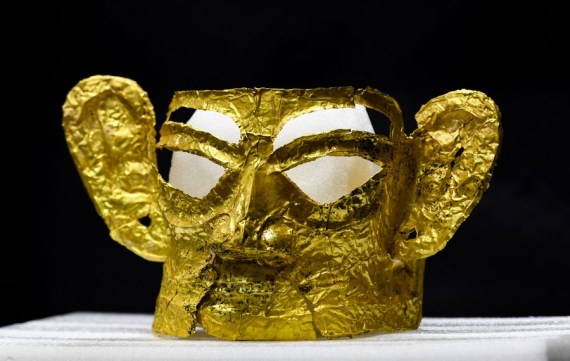 Beijing, 9 September (2021) - Chinese archaeologists announced Thursday that new discoveries have been made at the legendary Sanxingdui Ruins site in southwest China's Sichuan Province.

Among hundreds of major findings in the No. 3 sacrificial pit, a complete gold mask dating back about 3,000 years has attracted worldwide attention.

The newly found mask measures 16.5 cm high and 37.2 cm wide, and weighs around 100 grams, larger but lighter than the broken gold mask unearthed from the No. 5 pit earlier this year, according to the Sichuan Provincial Cultural Relics and Archaeology Research Institute.

Experts believe that the findings will shed more light on the ancient Shu civilization and promote exchanges and mutual learning between different civilizations.

When the gold mask was found in No. 3 sacrificial pit in June, the relic was covered in mud. The heavily deformed goldware was crumpled into a ball like a piece of manuscript paper and its shape was indistinguishable.

Chinese archaeologists took it out carefully. After preliminary cleaning and unfolding, a pair of big eyes appeared. It turns out to be a gold mask, one of the largest face masks in the ancient Shu civilization unearthed so far.

Ran Honglin, a researcher with the Sichuan Provincial Cultural Relics and Archaeology Research Institute, is in charge of the excavations in the Sanxingdui Ruins site.

"According to our observations, the facial features and size of the gold foil mask are similar to those of the bronze heads of Sanxingdui. We speculate that this gold mask is not an independently used artifact, but is used to cover the bronze head," said the expert.

Ran added that in terms of craftsmanship, the mask has not been remelted or recast. Gold is highly malleable, and can be hammered into thin sheets and then inlaid into its desired shape.

The Sanxingdui Ruins site was accidentally discovered by a farmer when he was digging a ditch in the 1920s. Covering 12 square km, the ruins are located in the city of Guanghan, about 60 km from Chengdu, and are believed to be the remnants of the Shu Kingdom, dating back at least 4,800 years and lasting over 2,000 years.

In 1986, a large number of unique relics were unearthed in the No. 1 and No. 2 pits, drawing global attention. So far, more than 50,000 pieces of relics have been unearthed at Sanxingdui.

"People in ancient Egypt especially worshipped the sun god. Wearing a gold mask, one would have the same appearance as the sun god. There is also the worship of the sun god in South America. It also explains the origin of the gold mask in Greece, as the sun god is a major god in Greek mythology," said Li Xinwei, a researcher with the Institute of Archaeology under the Chinese Academy of Social Sciences.

"It's quite likely that the ancient Shu civilization also worshipped the sun. As gold was valued by the civilization and used to forge masks, it may be related to such worship," Li added.

Instead of gifts to the gods, the masks of Mycenae were offerings to the deceased, Constantinos Paschalidis, curator of Antiquities at the National Archaeological Museum, told Xinhua in an interview.

Paschalidis noted that the Mycenaen death-masks are very precious and rare objects which were created for very important people.

The sheets of pure gold of some 24 carats in today's terms were hammered from the backside. The repousse technique was used to form the shape, according to Paschalidis.

Mexican archaeologist Edith Ortiz Diaz also pointed out the similarities in the craftsmanship of gold masks in different ancient civilizations.

"We can say that, from the point of view of goldsmiths, this marks the initial advances in metalworking. First grinding, then beating the metal to form a sheet," she said.

Experts from different parts of the world warmly welcomed the latest archaeological discovery at the Sanxingdui Ruins site, noting that the recent findings are "great news" for the global archaeological community.

"The discovery of the gold mask in China is one of the most important discoveries of the 21st century," Hawass said.

"This is a great great event. Although China, the Aegean and Mycenae are very far away, and we cannot have a direct connection between them, one may see that this is more or less a huge archaeological discovery. And it is a huge joy and a cause for celebration for archaeologists all over the world," Paschalidis said.

Li has been deeply involved in cross-cultural research and committed to archaeological cooperation with foreign counterparts. Li noted that he often marvels at the splendid civilizations of other countries and regions.

"Clashes are a requisite for the birth of civilizations. As civilizations evolve, clashes and fusions prove even more essential. We should eulogize these civilizations and respect the unique development path of each one," he said.

"Only with such an approach to different civilizations can we build a community with a shared future for mankind," noted the Chinese expert.