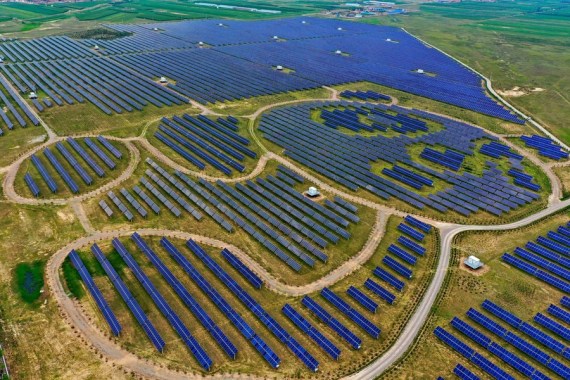 The power station where the panels are located has drawn global attention for its unique design. Covering an area equivalent to about 174 standard football fields, it can produce about 80 million kilowatt-hours of clean electricity every year.

"The design was inspired by the United Nations Summit on Sustainable Development held 2015, when the giant panda was chosen to represent China's low-cost and clean energy development," said Sun Jingsong, head of the power station.

If calculated by last year's per capita electricity consumption of 780 kilowatt-hours in China, the "pandas" are able to meet the demand of more than 100,000 people in the country for a whole year.

Meanwhile, a total of 26,000 tonnes of coal can be saved and 68,500 tonnes of carbon dioxide emissions can be slashed annually, according to Sun.

The country has pledged that by 2030, the share of its non-fossil energy consumption will reach 25 percent, and the installed capacity of wind and photovoltaic power generation equipment will exceed 1.2 billion kilowatts, while its carbon dioxide emissions per unit of GDP will drop by more than 65 percent compared with 2005.

Datong's panda-shaped power plant also matters a lot to the city, once badly reliant on heavy-polluting industries and known as China's "coal capital."

The city was long plagued by severe haze, and its air quality was marked one of the country's worst earlier this century. But now, blue skies are back.

As of June, the installed capacity of new energy in Datong accounted for 42.4 percent of the city's total and is expected to surpass that of traditional thermal power during the 14th Five-Year Plan period (2021-2025), according to Gao Biao, an official with the local energy bureau.

"China is leading in the development and promotion of renewable energy, and has greatly improved energy efficiency and reduced related energy intensity," said Axel van Trotsenburg, managing director of operations at the World Bank, during the Taiyuan Energy Low Carbon Development Forum held earlier this month.

"We have completed the construction of six more 'panda power stations' in China's Anhui, Guangxi and Inner Mongolia," said Sun, noting that China has reached cooperation intentions with countries including the Philippines, Fiji and Thailand.

Looking into the future, 100 "panda power stations" will be set up in more countries along the Belt and Road, further spreading the clean and eco-friendly "Chinese Kung Fu" to the rest of the world, Sun added.