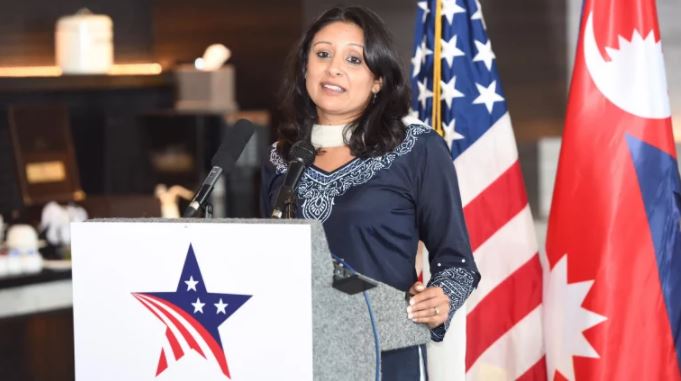 The Millennium Challenge Corporation (MCC) - a five year long project, involving US$500 million grant assistance for constructing transmission lines and road maintenance works in Nepal was signed in September 2017. This is the largest grant assistance project ever signed by Nepal. The project is on hold because parliament has not ratified this project. Due to fluid political situation in Nepal, the actors are in a situation neither to accept nor reject the MCC.  Instead, it has turned into a political hot cake. None of the political parties in the parliament has a required majority to accept or reject the MCC without the support of other parties. This is the reason why it is in a state of limbo.

Vice President of MCC, Fatema Z Sumar recently visited Kathmandu (9-12 September) to have first-hand information about delay in ratification and also to clear doubts and misunderstandings related to the MCC. During her visit, as a show of pressure tactics, the MCC opponents augmented their street protests and mass rallies denouncing her visit and demanding to cancel the project. Some activists are blaming the MCC to be a sell-out of national sovereignty in the name of development assistance.

Sumar interacted with political big shots having a stake in MCC ratification. If Nepali Congress Party responded to her positively, CPN (UML) remained undecided waiting first to have a response from the ruling political parties. Maoist Party wanted to go ahead after building political consensus and Madhav Kumar Nepal, with his new political outfit CPN (US), demanded a guarantee that MCC has no military alliance component (IPS) before his party votes in the parliament.

Dr Baburam Bhattarai from JSP is another lone figure supporting MCC but he is equally supporting Chinese BRI and increased cooperation from India. Ms Sumar left Kathmandu with a positive note expecting the MCC to be ratified without further delay and giving no deadline for ratification. However, given the degree of chaos and confusion with the MCC, the public is very much sceptical about MCC ratification.

Due to excessive politicization of the project, technical issues have taken a back seat. No one is questioning Nepal’s management capability to handle the project of this scale and size within a fixed time bound schedule in a context where time overruns and cost overruns are assumed to be normal. The project is already delayed by two years and it is still not sure about its commencement. The whole of the society is now divided into “for” and “against” MCC camps and the debate has percolated down to the street level. It is too difficult for an average Nepali to escape from the debate.

Even if the US agrees to cancel the MCC, citing lack of political consensus and commitment, it is going to leave a deep, divisive and indelible impact on Nepali polity and society for a long time to come.

Even if the US agrees to cancel the MCC, citing lack of political consensus and commitment, it is going to leave a deep, divisive and indelible impact on Nepali polity and society for a long time to come. MCC has turned out to be a botched donor funding programme. This brief write up seeks to explain how and why MCC is being politicized and reduced to a state of limbo. The MCC politicization is presented at two fronts, namely, external and internal fronts.

At the external front, the MCC opponents have sought to politicize it on two grounds, namely, (a) its relation with Indo-Pacific Strategy (IPS) – a military alliance; and (b) it is a counterweight to Belt and Road Initiative (BRI) that Nepal signed with China. Though IPS (2017) came much later than MCC (2004), on 1 May 2019, a visiting US official’s comment, “MCC falls under IPS” spoiled the broth. Moreover, to a series of queries made by the Government of Nepal on 3 September 2021, MCC response, literally, kept quiet or evaded the question by not saying anything about MCC and IPS but limiting only to MCC Nepal Compact and IPS.

The opponents have also sought to explain MCC overshadowing BRI. Interestingly, BRI and MCC were signed almost concurrently but the works related to MCC progressed swiftly with the establishment of the Secretariat while nothing has been done with BRI implementation. Now, the unconfirmed sources speak of Chinese officials behind instigating anti-MCC activities inside Kathmandu.

The MCC proponents have their own arguments to make. Nepal needs US assistance to neutralize possible pressures from India and China. In the absence of US, Nepal will be subservient to China or India. They further argue that failing to ratify the MCC project will damage Nepal’s image and international standing. A writer has bluntly pointed out, “if you cannot handle US grant assistance, how you would approach other donors like the World Bank or IMF, having stronger ties with the West, for the loan and other assistance?”

Having lost MCC in Sri Lanka, US cannot afford to gamble away MCC in Nepal. Nepal is the only country in South Asia expecting to join the MCC. With recent debacle in Afghanistan, definitely, MCC in Nepal speaks louder for Biden Administration. Due to Nepal’s strategic location, together with 70 years of bilateral relationship, it will be too difficult for both countries to wind up the MCC project so easily. It is one thing to have “take it or leave it” hard bargaining approach in negotiation, but in international relations one cannot pursue such hard bargaining tactics. Definitely, leaving Nepal is not going to be an easy job for US. After spending nearly a decade of project planning and preparation it will be too difficult to wind up the project at this stage. Imagine the situation it will leave on project staff currently working with MCC and the expenditures of the Secretariat!

Definitely, leaving Nepal is not going to be an easy job for US. After spending nearly a decade of project planning and preparation it will be too difficult to wind up the project at this stage.

Internal political dynamics of MCC presents far more complicated picture. Saving Nepali Congress Party, no other political parties have a unanimous stand on MCC. Interestingly, from its inception to the present stage of project ratification, MCC has passed through eight governments in Nepal headed by different political parties. Still there is difficulty in arriving at a political consensus. This is because political parties have their own hidden agenda. Even Sumar is reported to have commented that it is sad to see how an economic assistance program like MCC has been politicized.

The MCC agreement was signed when present day PM Sher Bahadur Deuba headed the coalition government of the Nepali Congress and the Maoist Party in 2017. Therefore, he has moral obligations to ratify the project. To a naïve outsider, MCC may looks like an albatross in Deuba’s neck; however, it provides him an immense bargaining power to discipline dissenting alliance members and the parties in opposition. It is rumoured that he is already threatening with a note like this: “Help ratify MCC or else I will dissolve the parliament and call early elections”.

Former PM KP Sharma Oli, after being deprived of power, has his own agenda to fulfil. He is carefully using MCC as a lever to create a split in the five-party alliance and settle scores with his arch rivals. There is unconfirmed news that he is ready to ratify MCC provided CPN(UML) governments in Provinces 1 and 2 is kept intact and support him to dissolve CPN (US) - the new political outfit of Mr Madhav Kumar Nepal that broke away from CPN (UML). This is the single reason why he has refrained from categorically responding to Sumar. Moreover, he is clear that if he says yes to MCC, it will be PM Deuba taking all the credits.

Madhav Kumar Nepal is in a difficult situation. Earlier, having formed a committee to do a study on MCC and recommended for certain amendments before seeking parliamentary ratification, he cannot back track from his position. He is sure that Oli is using MCC sword against him. Therefore, his strategy is to oppose MCC in a roundabout fashion seeking a formal guarantee that MCC is not a part of military alliance before his party votes in the parliament.

The Maoists are saying that MCC ratification will be done after striking national consensus with other political parties. To everybody’s knowledge, given the present state of political fluidity and animosity, it is near impossible to arrive at political consensus. Prachanda is more worried by the use of MCC to split five-party alliance than having to ratify MCC unconditionally.

Besides PM Deuba, Dr Bhattarai is another figure openly advocating MCC. However, his support is not just for MCC but as a part of general support to BRI and increased cooperation with India.

The smaller political forces that are not in power like the pro-royalists, radical communists, and religious fanatics have nothing to lose opposing MCC. In fact it provided an opportunity to demonstrate their political existence, at least, in the streets, if not in the parliament.

The smaller political forces that are not in power like the pro-royalists, radical communists, and religious fanatics have nothing to lose opposing MCC. In fact it provided an opportunity to demonstrate their political existence, at least, in the streets, if not in the parliament.

We will soon observe the fuller impacts of external and internal pushes and pulls of MCC on Nepali politics and society. The MCC debate has already overshadowed the problems of vaccines, Cabinet expansion, and chaos inside the parliament. As an immediate impact, the MCC will decide on the longevity of the five-party alliance and holding of next general elections. In a longer term, it will give new perspective on Nepal-US bilateral relationships and its spill over effect on Nepal’s relations with China and India. Ironically, MCC is meant for constructing electricity power transmission lines and road maintenance but political power and political rough roads are currently blocking its implementation.