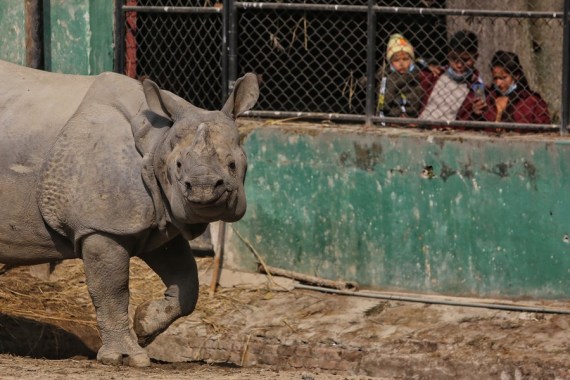 Kathmandu, 11 October (2021) - Nepal has managed to increase forested areas and the population of endangered animals, tigers and one-horned rhinos in particular, in its efforts to preserve biodiversity over the years.

The forested areas in the country have reached 45 percent of the total land area. "This is a significant jump from less than 30 percent in the early 1990s," Megh Nath Kafle, spokesperson for the Ministry of Forests and Environment, told Xinhua.

A network of 20 protected areas covers nearly 24 percent of the total forest areas and manages over 243 watersheds, according to the ministry.

In 1957, the Nepali government nationalized the privately-owned forest resources and continued to expand governments' role in forest protection and management till early 1970s. In late 1970s, a community-based forest management system was introduced, and there are over 22,000 forest user groups now across the country which have been proved to be vital in preserving forest resources.

"The preservation of forest resources under the community-based forest management system, the migration of people from hilly areas to plain areas leaving forests to grow, and the increasing use of cooking gas instead of fire woods have all contributed to the growth of the areas covered by forest," said Prabhu Budhathoki, an expert on biodiversity conservation.

According to the Forests Ministry, Nepal boasts an ecologically diverse landscape which is home to many different species of flora and fauna. The South Asian country has as many as 35 different vegetation types and 118 ecosystems.

"The community-based forest management system has played an important role not only in expanding the forested areas, but also in preserving biodiversity and wildlife in forests managed by community forestry user groups," said Bharati Kumari Pathak, chairperson of the Federation of Community Forestry Users in Nepal.

For the protection of vulnerable wildlife species, small zoos have been developed inside community forests, she said.

Besides notable progress in forest protection, Nepal has also made efforts in preserving tigers and one-horned rhinos, both endangered species.

In 2010, Nepal, along with other range countries, endorsed the St. Petersburg Declaration on Tiger Conservation. Since then, the country has been conducting a four-year periodic assessment to track the progress toward reaching the national target of 250 tigers.

The conservation efforts in both Nepal and India are lauded, as one-horned rhinos were once on the verge of extinction with just 200 living by the 1900s, according to the World Wildlife Fund.

"Nepal has set an example in the conservation of tigers and one-horned rhinos, and is ahead of any other country in increasing the tiger population," said Budhathoki, a former member of the National Planning Commission. "The international community should help Nepal continue the preservation efforts as the county, despite being one of the poorest in the world, has invested heavily on the preservation of important species."

Poaching for illegal trade in rhino horns has remained the biggest threat, and Nepal has mobilized its army to fight the poaching, noted Budhathoki.