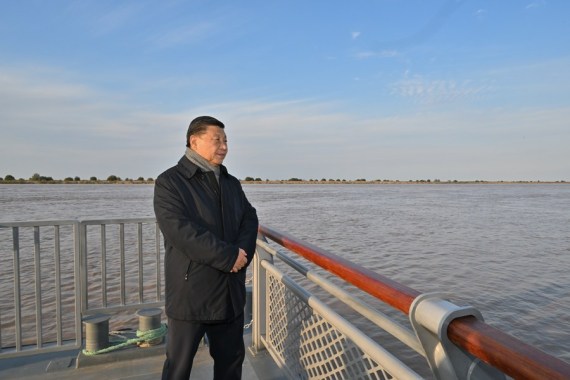 Beijing, 24 October (2021) - Chinese President Xi Jinping wrapped up his inspection tour on the downstream of China's second-longest river with a symposium dedicated to it on Friday. Throughout the three-day trip in eastern Shandong Province, Xi stressed the importance of ecological protection of the Yellow River basin, again highlighting his vision for ecological civilization in China.

The Yellow River is an example of Xi's persistent emphasis on promoting ecological civilization. An important part of Xi's governance in China, ecological civilization centers on protecting the environment. As he said earlier this month, "we need to solve the problems brought by industrial civilization, keep human activities within the limits of the ecology and environment, and carry out holistic conservation and systematic governance of mountains, rivers, forests, farmlands, lakes, grasslands and deserts."

Since the 18th National Congress of the Communist Party of China (CPC), Xi has made many instructions on matters related to the Yellow River. This week, by visiting Dongying, Shandong Province, he checked out the upper, middle, and lower streams of the 5,464-kilometer Yellow River.

His quote, "Green mountains are gold mountains," has become well-known worldwide and has rich connotations. A sound ecology and environment is not just a natural asset but also an economic asset, and it affects the potential and momentum of economic and social development.

Xi's far-sightedness on ecological civilization - more specifically, climate change - was also evident on Friday. He asked to pay "great attention to the complex and profound impact of global climate change, actively respond from a security perspective, comprehensively improve the level of disaster prevention and control, and guard people's lives."

Last year, Xi announced that China aims to reach the carbon peak before 2030 and carbon neutrality before 2060, a milestone for China's and the world's ongoing battle against climate change.

Ecological civilization is a long-running strategy in China, not some short-term fancy idea, and it is for the good of the people. The CPC has always put the Yellow River high on the agenda. Shortly after the founding of the People's Republic of China, Mao Zedong called for efforts to manage the Yellow River's affairs well.

The reason is, despite being affectionately called China's Mother River, it has brought great challenges to the Chinese nation with soil erosion, sand and silt invasion, floods, river course changes, and bank collapses for millennia.

The people are the state, and the state is the people. Xi's consistency also tells the story of staying true to the CPC's original aspiration.