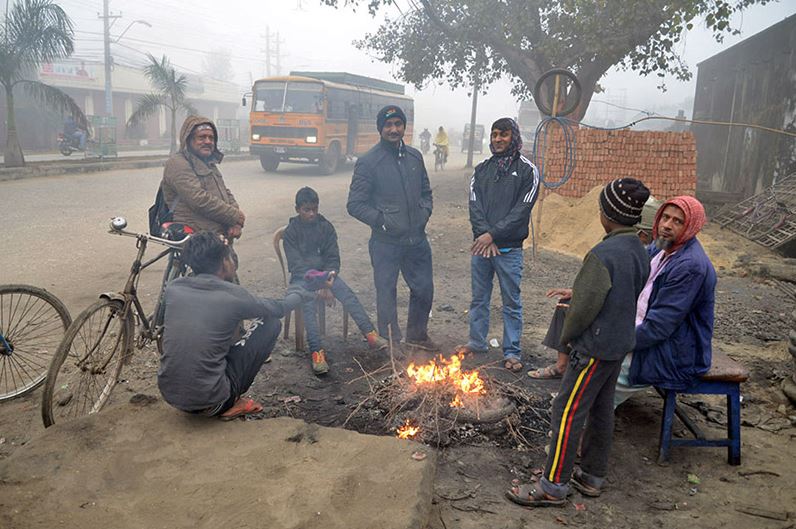 Within the past two decades, Nepal’s Tarai region has been experiencing severe cold during the winter (December to February). Vulnerable communities often become victims of the cold waves.  Based on the information available from various news media, of the total victims of this cold waves, the low-income families’ account for 15 percent, elderly people above the age of 65 account for 35 percent, and children below the age of 5 account for 50 percent. These vulnerable communities often become victimized from pneumonia, influenza, COPD, asthma, fever, and hypothermia.

Though the climate data have shown an increasing trend of annual temperatures across Nepal, the Tarai region faces severe cold waves during the winters. As a result, the decades-long traditions of migrating to the Tarai region to escape from the cold weather of the mountain and mid-hills regions have reversed recently. Global climate change, rapid industrialization in the neighboring county, and increasing anthropogenic activities in Nepal have contributed to abnormal climatic and weather patterns in the Tarai region.

Recently, Nepal has been experiencing unprecedented weather patterns. For example, the Tarai region experiences severe thunderstorms and lightning mostly between 8 pm and 1.00 am in the nights, while such extreme incidences are noticed in the mid-hills between 3.00 and 6.00 pm. Additionally, Nepal is also experiencing heat waves, cold waves, and intense but short duration rainfalls and unprecedented floods, but prolonged dryness.

Each of these incidences are contributing to the losses of lives and properties. Many built-in infrastructures have been washed away by floods and landslides. Surface run-off has increased as many areas have been turned into impervious surfaces in the process of urbanization. As a result of these impervious surfaces, underground water replenishment has been very poor, and water tables are deepening. Where water tables are close to the land surface, arsenic contents have made water unsuitable for drinking.

The Intergovernmental Panel on Climate Change (IPCC) publishes various reports informing the scientific community and the public about the changing patterns of climate. Each of these reports have warned possible global warming and many unprecedented consequences thereafter. For example, IPCC’s first report in 1990, second report in 1995, third report in 2001, fourth report in 2007, fifth report in 2014, and sixth report in 2021-2022 all have warned that emissions resulting from human activities have substantially increased the atmospheric concentrations of the greenhouse gases.

The Tarai region experiences severe thunderstorms and lightning mostly between 8 pm and 1.00 am in the nights, while such extreme incidences are noticed in the mid-hills between 3.00 and 6.00 pm. Additionally, Nepal is also experiencing heat waves, cold waves, and intense but short duration rainfalls and unprecedented floods, but prolonged dryness.

These reports have predicted that under business-as-usual scenarios, temperatures are likely to increase by 20 C by 2025 as compared to pre-industrial levels, and 40 C by 2100. Since the 2005, anthropogenic activities have contributed to the atmospheric concentrations of CO2 above 379 ppm, a maximum record in 650,000 years. Because of the increase in temperature and climate abnormalities, a large number of species are facing extinction. Food security has become a great issue. Climate abnormalities also have created several health problems, and many have lost their lives due to respiratory illnesses. A dozen of studies have cautioned about health impacts because of climate change. Climate abnormalities also have impacted the agricultural production in Nepal. The National Agriculture Research Council (NARC) has observed negative impacts of cold wave on agricultural productivity in Nepal in general and in the Tarai region in particular.

Of the four climatic seasons of Nepal, namely, rainy summer or Monsoon (June–September), winter (December–February), pre-monsoon (March–May), and post-monsoon (October–November), the period between December and February started becoming worst for the Tarai region since late the 1990s. Theoretically, Nepal’s position just north of the tropic of cancer should have created a favorable condition for relatively pleasant climate. As such the Tarai plain would have pleasant climate during the months of December and February, however, the cyclonic system originating from the Arabian Sea during the winter season with minimum moisture contents makes the climatic conditions of the Tarai very abnormal. By its latitudinal location, maximum temperature in Nepal’s Tarai in average should not fluctuate more than the range of ±0.056 ° C/year and minimum temperature should have remained within the variations of ±0.002° C/year.

However, the real story has been very different recently. Cold waves hit the Tarai region from mid-November to mid-February. This cold wave damages crops and causes deaths of many vulnerable population. For example, the cold wave in the Tarai region has caused 825 deaths between 1974 and 2013. Though there is a fluctuation in the number of deaths due to cold wave in different years, there has been a gradual rise in the number of deaths from cold waves since the year 2000. Since 2009, the severity of coldness has increased resulting into many deaths and a decrease in agricultural production.

The number of deaths due to cold wave varied remarkably among vulnerable age group. This is attributed to the lack of adequate living conditions, lack of warm clothes, and the lack of nutritious food. In response to this, the Government of Nepal often distributes firewood to the local inhabitants, and warm clothes to the newborn babies and mothers. However, the burning of firewood, cow dung, agricultural residues, plastics, cardboards, and jute bags has contributed to the production of plumes of sulfates, smoke particles, and other anthropogenic aerosols. These particulates are blocking sunlight and promoting cloud formation.

The addtion of anthropogenic gases into the atmosphere, through the burning of agricultural residues including cowdung and plastics has produced brown cloud, to be specific the Asian brown cloud (ABC). This ABC contains aerosols with carbon particles, carbon monoxide, and hydrocarbons. The ABC forming a thick haze layer in the lower troposphere directly impacts the lives in the Tarai region of Nepal.

It is estimated that the amount of sunlight reaching the Earth's surface has been reduced. Obviously, when solar radiation is blocked in the atmosphere, the subtropical Tarai region located just above the tropic of cancer suffers from the lack of solar radiation. The calm wind during the winter also helps to thicken the pollutants in the atmosphere. The addtion of anthropogenic gases into the atmosphere, through the burning of agricultural residues including cowdung and plastics has produced brown cloud, to be specific the Asian brown cloud (ABC). This ABC contains aerosols with carbon particles, carbon monoxide, and hydrocarbons. The ABC forming a thick haze layer in the lower troposphere directly impacts the lives in the Tarai region of Nepal. This brown cloud has been the cause of nearly two million deaths in Asia alone.

Studies have shown that the ABC covers most of the Arabian Sea and Bay of Bengal. Satellite photos have detected several giant brown stains hanging in the air over much of South Asia and the Indian Ocean every year between January and March. The layers of brown cloud are thickened each year as the airborne particles and pollutants from combustion of cowdung, woodfires, vehicles, factories, and industries add more particulates into the atmosphere. Low winter rainfall that generally comes from the moisture-laden air from the Arabian Sea creates a favorable environment for the thickening of the layers of brown cloud. Though the brown cloud is not a permanent feature of the atmosphere that occurs during January to March, it contributes to a decrease in rainfall and a decrease in agricultural production, and impacts health, agriculture and climate. This is why Nepal’s Tarai region faces the brunt of winter cold waves.