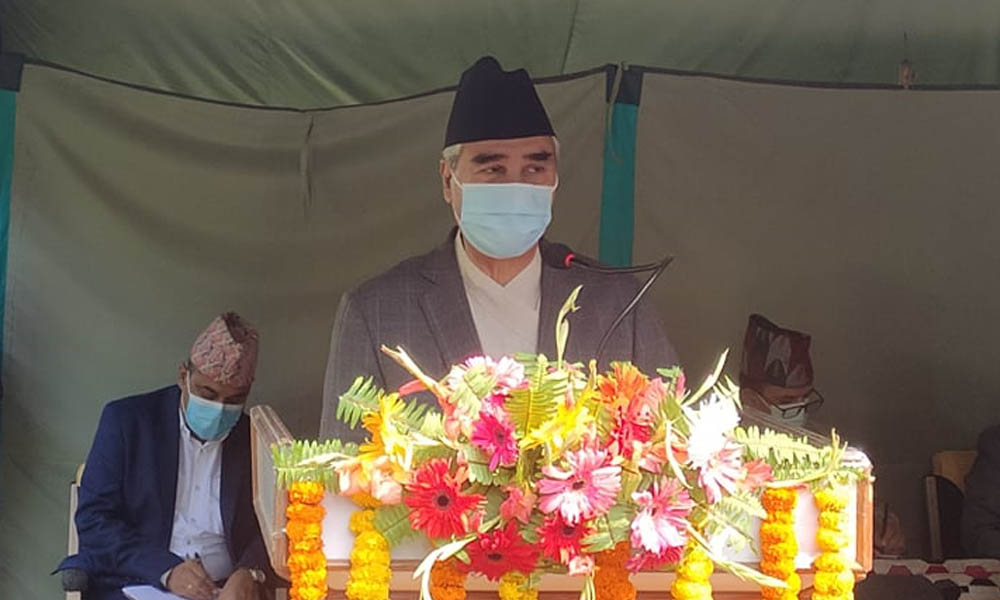 Kathmandu, 27 October (2021) - Prime Minister Sher Bahadur Deuba has said an order of mandamus issued by the Supreme Court protected the Constitution and democracy.

In his address to a programme organsised by the Nepal Tarun Dal central executive committee here today, marking the 68th establishment of the NC youth wing Tarun Dal, the NC President and the Prime Minister was of the view that it was the mandamus order that turned to be the savior of the Parliament, Constitution and democracy.

“KP Sharma Oli (erstwhile Prime Minister) was not granted the constitutional right to dissolve the Parliament, it was the Supreme Court that had protected the Constitution twice when the Parliament was dissolved unconstitutionally,” he said, adding that it kept no meaning to argue that the government (incumbent), a coalition of five political parties, lacked people’s mandate. The government has a clear majority, according to him.

He went on to say that the government and his party preferred not to speak about the matter of Chief Justice and the court. “This is the internal issue of the court which in itself is capable of sorting it out.” He took time to make it clear that Minister for Industry, Commerce and Supplies, Gajendra Hamal, had resigned from the post being the NC leader.

The NC President further stressed that the Tarun Dal’s role was vital to make the party’s upcoming 14th General Convention a success.

On the occasion, President Deuba was presented with a letter of felicitation in recognition of his untiring contribution to the democracy movement and for being a source of inspiration to the youths in the party by Tarun Dal’s president Jeet Jung Basent.

Tarun Dal’s former president and Home Minister Bal Krishna Khand  asserted that the role of youths  was crucial to make the party competent, consolidated, efficient and successful. “Youths are the major pillar and force of the party and they should be united and empowered to further strengthen the party.”

Home Minister Khand said the present coalition government has been formed for protecting democracy and the constitution, stressing the equal role of youth in making it successful. The party will become victorious in the upcoming general election only if the tendency of criticizing own party leaders is put to an end, he added.

Minister for Water Supply and Sanitation Umakanta Chaudhary called on the youths to come forward for defending democracy, institutionalising the party's ideology and fulfilling the responsibility given by the party.

Expressing worry over the Tarun Dal not getting full shape, he urged the youths to be united for building a Nepali Congress that 'belongs to all and that is good'. Minister Chaudhary also underscored mobilizing the youths in the right way as they are the future and the wealth of the nation.

Former president of Tarun Dal and former minister Mahendra Yadav said the Tarun Dal should be united and active to help make the party stronger. The youths have a paramount role to ensure a majority victory of the Nepali Congress in the upcoming election.

Tarun Dal president Jeetjung Basnet said the Tarun Dal would always stand determined to make the party strong and to fight against injustice, anomalies and aberrations.

Home Minister Khand and Minister Chaudhary were feted by presenting Letter of Appreciation on the occasion. Similarly, the Dal's former presidents Yadav, Binod Prakash Kayastha and Udaya Shumsher Rana were also felicitated by presenting them with shawls as a mark of honour.

Mediaperson and litterateur Dr Nawaraj Lamsal who wrote the lyrics of the Tarun Dal's anthem was also felicitated at the programme.

The Nepal Tarun Dal was formed on the 10th of Kattik in 2010 BS at the initiatives of Nepali Congress' founding leader Bishweshwor Prasad Koirala. It remained dormant after the then king Mahendra arrested BP Koirala, the first people-elected Prime Minister, on Push 1, 2017 BS.

The Tarun Dal was reactivated in 2054 BS by then NC president Girija Prasad Koirala and it has been expanding its organisation since then.