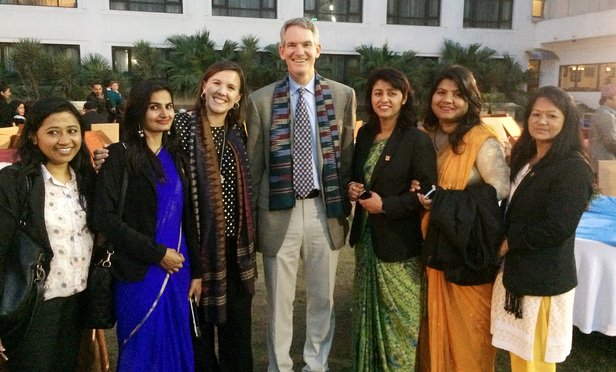 Kathmandu, 16 November (2021) - Though the Constitution has guaranteed 33 per cent women participation in State every apparatus, the women’s presence in judiciary is minimal and so is the case of other areas as well.

The Constitutional provision about the 33 per cent women’s participation has largely remained unmet in every area except legislature despite the completion of around 15 years of the promulgation of the Interim Constitution of Nepal-2007. The 2007 constitution had first time ensured the right of women to take part in the state structures on the basis of the principle of proportional inclusion and the existing Constitution inherits the provision.    However, lately the judiciary has started attracting women.

According to the data with the Nepal Bar Council, till November 2 this year, 448 women have acquired the license of senior advocate and the number of women is just 28. It means women make up just 6.25 per cent and remaining others are all males.

Likewise,   the number of advocates is 18,951 and women make up just 15.64 per cent as they are counted at 2,964.  The Bar’s data since some 18 years showed that there were 682 women advocates at the time and after a decade, this figure rose to 1,416, suggesting the increasing presence of women in the judiciary.

Shantidevi Thapa is known as the first woman law practitioner in Nepal. She had worked as the law agent in the field of judiciary.  Sushila Singh Silu has the identity as the first woman advocate, senior advocate and Supreme Court’s judge.

The number of licensed advocates has reached 16 per cent and it provides an ample ground to argue that women’s attraction to judiciary is gradually increasing and senior advocate Usha Malla Pathak seems to be convinced by this notion. “Women’s participation in judiciary is increasing and it is likely to further expand in the days to come,” she said.

Women’s participation in other state bodies except legislature is not encouraging as the participation is not met by the constitutional provision of 33 per cent and so is the case of judiciary, according to her.

“But we have some constitutional provisions promoting the women’s participation in judiciary.   The field is relatively more challenging, but the current atmosphere shows that the field continues to attract new generation. She argued that women should be encouraged to seek a career in judiciary from college life.

Her personal assumption is that women are by nature committed to the given roles and responsibilities. “I have not yet heard of any woman convicted of corruption in the judiciary. As I believe women are here not for financial gains. But sometimes their competency and efficiency is questioned.’’

Women’s participation in the government attorney is increasing

Until a few years ago, there were a handful of women in the government attorney field. But now the scenario is different. Joint Attorney Rama Devi Parajuli is the woman serving in the highest post of the judiciary. She had joined judiciary as the attorney in 2055 BS. At the time, Sharada Bajracharya was the Deputy Attorney General and after her retirement, Parajuli was the single woman officer till 2063 BS. The Constitution and the Public Service Commission’s policy about inclusion have led to the rise in women’s participation in judiciary.

She shared, "Arrangement of only one quota was made for women from 2050 BS to 2055 BS. Men and women have coming in the same way after inclusive policy."

Sharing the experience that women are more comfortable with responsibilities and obligations, she opined, "I have never seen corruption, irregularities and anomalies in the place where women have taken responsibility. Women can do good job for justice if opportunity is given."

As per the statistics of Spokesperson of the Judiciary Council, Man Bahadur Karki, looking at the work place, there are 408 government prosecutors that means 16.88 per cent. There are 242 women in judiciary service and 69 women employees in law service.

Judge Prabha Basnet who is now working at High-Court Dipayal, Mahendranagar, has spent 40 years of her life in judicial service. She has completed 25 years working as a judge in district, high and special courts. Basnet has never experienced herself weak or insulted while sitting in for bench as a woman.

"When I was sitting in the court session, I did not find any difference a man and woman. People did not believe me that I am a judge. They used to ask me that are you or your husband is judge", she shared.

Basnet added that she when sitting in a bench as a judge felt heartbroken to see the case that woman facing problem unnecessarily.

Number of women judges working in courts is also less. There are total 21 quotas in the Supreme Court. As per the data of judicial council till November 8, there are now 20 judges. Of them, there are three women judges—Mira Khadka, Sapana Malla Pradhan and Sushmalata Mathema.

As per the constitution, there is arrangement of three level of judiciary—Supreme Court, High Court and District Court. All seven provinces have high court. Out of seven high courts, only one high court has a woman chief judge.

There are total 35 women judges in Supreme, High and District Courts. Out of total 453 quotas of judges, there are only 7.72 per cent women judges.

In the experience of former Chief Justice Sushila Karki, who is the first female chief justice of Nepal, women judges comparatively have more sentiments for justice and they concentrate on their work more.

"The Judiciary and the government too should encourage more women to join this profession, but it has not been seen so far," she said. According to her, women judges have a little bit more judicial sentiment as they are the fountain of love, care, empathy and compassion. "They give verdict after thinking much and also do not go out of track. Although women judges face many challenges in their career, they should move ahead facing up such challenges," she suggested.

Karki who has a background of a law practitioner worked in the Supreme Court for nine years. She served as the Chief Justice for only 11 months.

"When I became the Chief Justice, it was thought that women do not have the capability to become the chief of the judiciary. But I showed that women are capable enough to work as the Chief Justice through my work. However, the situation is not like that now," she recalled.

Former Chief Justice Karki said many women have joined the legal profession and also in the judicial service now which makes her happy. She opined that all the women who have come in this sector should be made capable and proficient.

She also shared that in some countries 50-60 percent women were in the judicial service but it was less in Nepal and India. As she said the proportion of women in the judiciary is high in China.

Former Chief Justice Karki said she did not find any woman judge involved in corruption during her term in office. She added the women in the judicial role should get the full support of their family members as their job demands their giving more time to their profession, preparing case files, writing judgements etc.

"It is the women who are more victimized in a country dominated by patriarchy. Women better understand fellow women's problems and grievances. There would be fewer anomalies seen in the judiciary at present if there are more women in the judicial sector," she opined.

More women are required in the judiciary on the basis of population: Dr Gyawali

Senior advocate and constitutional lawyer Dr Chandrakanta Gyawali is of the view of implementing the constitutional provision of inclusion and proportional representation and the associated laws even in the judiciary.

"Women have enhanced their qualification, expertise and capacity in recent days. Women seem to concentrate more in their work compared to their male counterparts," he said, adding that it is imperative to retain the women who are already in the judicial sector by providing them various incentives.

The state should give attention to increasing women participation in the judiciary in line with the constitutional provision.