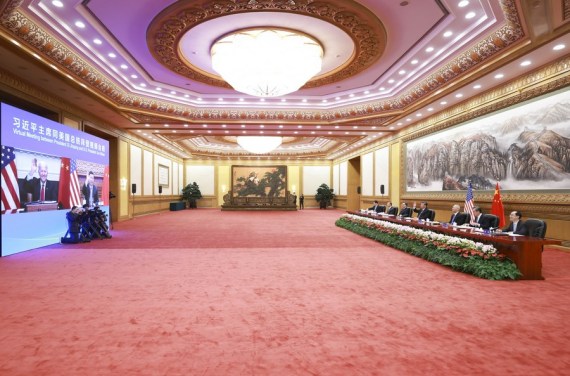 Beijing, 18 November (2021) - Chinese President Xi Jinping had a virtual meeting with U.S. President Joe Biden Tuesday on the direction of China-U.S. relations and on some topics of global importance.

The following are some highlights of Xi's remarks on China-U.S. cooperation on global issues.

-- A sound and stable China-U.S. relationship is required for advancing the two countries' respective development and for safeguarding a peaceful and stable international environment, including finding effective responses to global challenges such as climate change and the COVID-19 pandemic.

-- China and the U.S. should focus their efforts on shouldering responsibilities of major countries and leading global responses to outstanding challenges. China-U.S. cooperation may not solve all problems, but few problems can be solved without China-U.S. cooperation. The global initiatives China has proposed are all open to the U.S. and we hope the U.S. will do the same.

-- Drawing ideological lines or dividing the world into different camps or rival groups will only make the world suffer. The bitter lessons of the Cold War are still fresh in memory. We hope that the U.S. side can match its word of not seeking a "new Cold War" with concrete actions.

-- Democracy is not mass produced with a uniform model or configuration for countries around the world. Whether a country is democratic or not should be left to its own people to decide. Dismissing forms of democracy that are different from one's own is in itself undemocratic.

-- On energy security, China and the U.S. need to call on the international community to jointly protect global energy security, strengthen cooperation on natural gas and new energy, and work with other countries to keep global industrial and supply chains safe and stable.

-- On climate change, all countries need to uphold the principle of common but differentiated responsibilities, and strike a balance between addressing climate change and protecting livelihoods. What the world needs is less finger-pointing or blame game, but more solidarity and cooperation. Words matter, but actions matter even more. Developed countries need to earnestly fulfill their historical responsibilities and due obligations, and maintain policy consistency.

-- On public health, China and the U.S. need to call for the establishment of a cooperation mechanism for global public health and communicable disease prevention and control, and promote further international exchanges and cooperation.