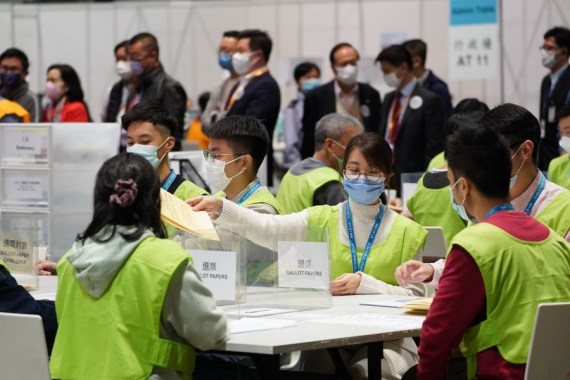 Beijing, 21 December (2021) - History will remember the moment when more than 1.3 million Hong Kong voters went to the polls and elected all 90 members of the Chinese city's new Legislative Council (LegCo) on Monday.

This election signifies that the principle of "patriots governing Hong Kong" is taking hold, and marks a new chapter for democracy's development in this metropolis, as well as a fresh starting point for its pursuit of good governance.

The successful election has smashed all the smears and lies by some foreign forces, and testified that the entire Hong Kong society wants stability and security, and rejects any intervention by anti-China forces that seek to stir chaos in Hong Kong.

Prior to the LegCo election, some politicians in the United States and Britain went to great lengths to besmirch Hong Kong's new electoral system, and sought to incite anti-China agitators to disrupt the election, which was a reckless intervention in China's internal affairs.

A handful of foreign media outlets also joined the smearing campaign. In their professedly unbiased reports, they focused on such topics as the turnout rate and representation, and churned out a large number of prejudiced stories.

While concocting and peddling lies about Hong Kong, they turned a blind eye to such burning problems as declining turnout rates, money politics and surging political polarization that are suffocating the political systems back in their own countries.

All roads lead to democracy. One does not have to be a political scientist to understand that the ultimate yardstick of good democracy is whether it can actually ensure the rule by the people, and meet the real needs of the general public.

During this election, candidates and voters cared very much about the welfare of the people and the development of Hong Kong. There is now broad consensus in Hong Kong that development is the golden key to solving all sorts of problems confronting the city.

"I am voting to choose a new bunch of people to make Hong Kong a better place," a resident was quoted by The Associated Press as saying. "I am a patriot, and I just hope for peace and quiet, and to have a good livelihood."

This election also marks a key step towards establishing in the city a democratic system that fits Hong Kong's conditions and has its own characteristics, and will stimulate high-quality development of democracy in the Hong Kong Special Administrative Region (HKSAR).

Under British colonial rule, there was no democracy in Hong Kong, said a white paper titled "Hong Kong: Democratic Progress Under the Framework of One Country, Two Systems" issued by China's State Council Information Office on Monday.

The white paper presented a comprehensive review of the origin and development of democracy in the HKSAR, and the principles and position of the central government in Beijing.

"The determination, sincerity, and efforts of the Communist Party of China (CPC) and the Chinese government to this end have remained consistent and are obvious to any objective observer," it said.

The anti-China forces in the West always try to fake their love for Hong Kong and the people there, claiming from time to time that they stand with them. Yet their ulterior purpose is to play the Hong Kong card to contain China.

However, those anti-China Western politicians need to know that they are in no position to tell China which kind of path of democracy Hong Kong should take. Under no circumstances can they bend the iron will of the Chinese people, including Hong Kong residents, to maintain stability and boost development in Hong Kong.

Next year marks the 25th anniversary of Hong Kong's return to the motherland. With the implementation of the National Security Law for Hong Kong and the improvement in the city's electoral system, more patriots will be able to serve in the LegCo, and Hong Kong's legal and business environment will thus be better and the society more stable and harmonious. A brighter future for the "Pearl of the Orient" is in the making.