Time for America to wake up from democratic delusion 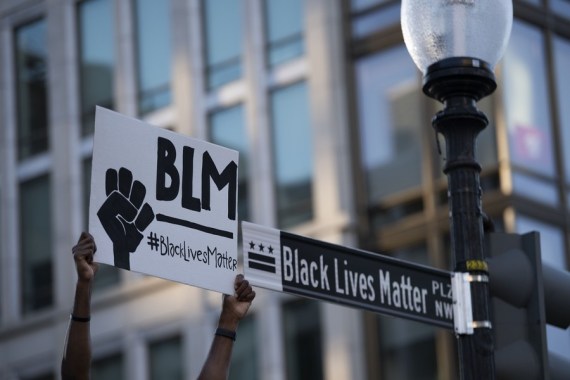 The White House claimed "a diverse group of the world's democracies" had attended the virtual event, and it already planned a second, in-person event for next year.

Biden clung to the hope that the gathering, allegedly focusing on fighting authoritarianism, corruption, and violation of human rights, could rally the like-minded to defend what he has described as "universal values."

However, many countries around the world have called into question whether the United States is in a position to do so.

Drawing an ideological line at the expense of international solidarity, the United States excluded countries representing billions of people from the so-called "Summit for Democracy" and sought to keep the rights to defining democracy to itself.

The gathering is hardly an event to promote democracy as the United States claims, given the absence of some major countries in the world, two-thirds of African nations, and almost the entire Arab world.

Photo taken on June 8, 2020 shows a protester holding a sign that reads "Black Lives Matter" near the White House during a demonstration over the death of George Floyd in Washington D.C., the United States. ()

Rather than a Summit FOR Democracy, it is simply a Summit AGAINST Democracy.

Portraying itself as the champion of democracy is hypocritical at least.

The United States has long been obsessed with exporting its own version of democracy, wreaking havoc in many countries and regions.

Color revolutions orchestrated by the United States have brought about great disorder and chaos, while Washington's sanctions have exacerbated humanitarian crises and COVID-19-induced calamities in multiple countries.

A failure to contain the COVID-19 pandemic has led to more than 51 million infections and nearly 810,000 deaths in the United States, where African Americans have suffered disproportionately and hate crimes against Asian Americans are on the rise.

White flags honoring the lives lost to COVID-19 are seen on the National Mall in Washington, D.C., the United States, on Oct. 2, 2021. (Xinhua/Liu Jie)

Political divide continues to deepen in the United States, with partisan interests overriding national priorities. The abuse of gerrymandering testifies to flaws in the country's electoral and democratic systems.

Democrats and Republicans are increasingly antagonistic toward each other, with blue states and red states moving further apart. Partisanship and endless political fights have prevented the United States from moving toward in the right direction.

U.S. democracy has also been swamped by money. Political spending in the 2020 election topped 14 billion U.S. dollars, more than doubling the total cost of the record-breaking 2016 presidential election cycle.

The United States is therefore in no position to style itself a champion of democracy, let alone a leader of democracy.

The country needs to adopt an open and inclusive attitude toward different forms of democracies rather than indulge in the delusion created by itself.

(The author is a commentator on international affairs, writing regularly for Xinhua News Agency, CGTN, Global Times, China Daily, etc. He can be reached at [email protected])