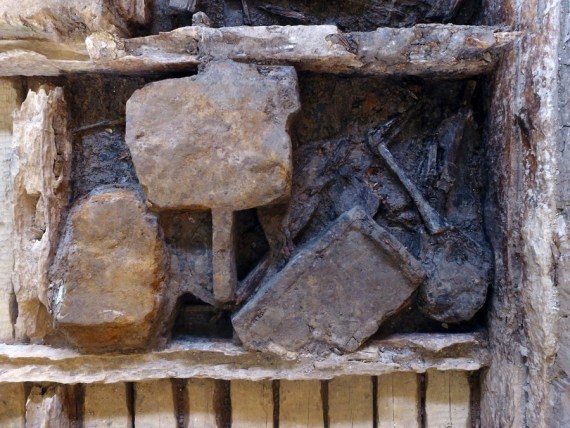 Jiangxi Provincial Institute of Cultural Relics and Archaeology/Handout via Xinhua

Nanchang, 26 December (2021) - An ancient tomb in east China's Jiangxi Province has been identified as belonging to the royals of the State of Yue in the Warring States Period (475-221 BC), local authorities said Saturday.

Two dagger-axes with inscriptions are the highlights among over 2,600 pieces of relics unearthed from the tomb site in Zhangshu City. Judging from the inscriptions, archaeologists believed that the tomb's owners were descendants of Goujian, an outstanding king in the history of the Yue state.

A large number of wooden lacquerware, jadeware, musical instruments and weapons, among others, have also been excavated.

Seven coffins were found in the 230-square-meter burial chamber. Archaeologists inferred that those buried inside lived in the mid-Warring States Period.

Excavation and research works of the tomb started from 2017. The new discoveries are of great significance for studying the history of the Yue state, according to the archaeologists.