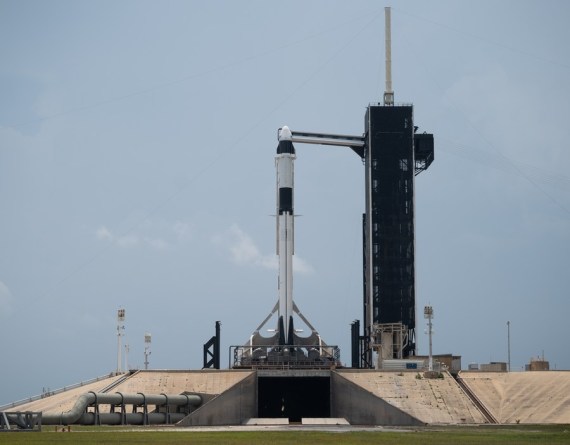 The incident has once again sparked concerns on how the SpaceX's Starlink plan would endanger the security of outer space.

The Starlink plan sets to launch 12,000 satellites in low Earth orbit between 2019 and 2024. The American company has launched nearly 1,950 Starlink satellites, of which about 1,800 are in orbit and providing internet services, accounting for one third of all in-orbit satellites.

In 2019, the European Space Agency's Aeolus Earth observation satellite had to perform an evasive maneuver to avoid a collision with a Starlink satellite dubbed "Starlink 44" that SpaceX purposely descended to an altitude of 320 km to test its deorbit techniques.

NASA is well aware of the threat posed by Starlink. In March, NASA and SpaceX signed a joint spaceflight safety agreement, in which SpaceX has agreed to move any of the Starlink satellites out of the way if they stray too close to the International Space Station or other NASA spacecraft.

As regards the dangerous approach to the European Space Agency's satellite, SpaceX has failed to offer a reasonable explanation. Likewise, this time the American company has not made any comment to respond to global concerns.

Clearly knowing the risk of collision, and with so many lessons to learn from, Starlink satellites still had two close encounters with the Chinese space station this year without any warning, which is shocking and unreasonable.

With growing space exploration activities, spacecraft of all countries should fulfill the international obligation to maintain a safe distance and close communication. When concerning manned spacecraft, the safety of astronauts should be given top priority.

According to the Outer Space Treaty, the cornerstone of the international law concerning space, astronauts shall be regarded as envoys of mankind in outer space. Therefore, the safety of manned spacecraft is especially important.

Therefore, there is no excuse for the United States, a signatory to the treaty, not to take up its due responsibility for the actions of SpaceX.

SpaceX should also respect the treaty. It should offer all parties whose spacecraft may face the risk of collision the access to information regarding the orbits of its Starlink satellites as well as plans for orbit changes. The company should also help coordinate how to avoid such risks.

The recent close encounters have made it clear that the U.S. government and SpaceX have failed to fulfill their respective obligations, and turned a blind eye to the safety of Chinese astronauts. The U.S. side should respect the order of outer space based on the international law. It should also take immediate actions to make sure that such things will never happen again.

The peaceful exploration of space has been a consensus of the international community. Maintaining space order is in the interests of the human race as it continues to explore the heavens. In the future, more countries and companies will send their spacecraft into space. Thus it is imperative that all parties obey the traffic rules up there.