Six global issues to resolve in 2022 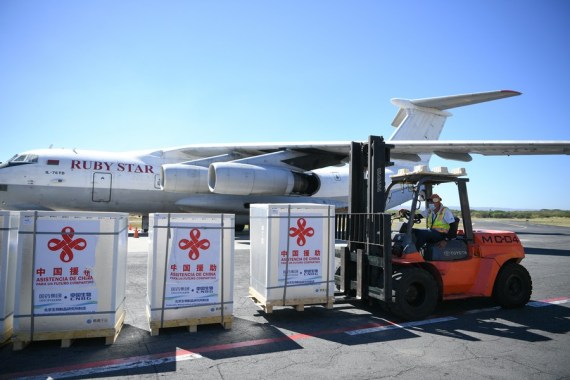 Beijing, 3 January (2022) - The year 2021, marked by the rampant COVID-19 pandemic with several kinds of variants, leaves behind a number of unresolved global problems.

In 2021, the recovery of the global economy encountered serious challenges including inflation, deteriorating relations between Russia and the West, and deadlocked Iran nuclear talks.

Yet looking ahead to 2022, solutions remain in sight for these seemingly intractable problems.

According to data from the World Health Organization, the cumulative numbers of confirmed COVID-19 cases and deaths worldwide have exceeded 280 million and 5.41 million respectively, and the Omicron strain has spread to more than 110 countries and regions around the world.

Speeding up vaccination globally is key to ending the pandemic. The distribution group of the COVID-19 Vaccination Program Implementation Plan recently called for a 70-percent vaccination coverage rate in all countries around the world by mid-2022. So far, China has provided nearly 2 billion doses of vaccines to more than 120 countries and international organizations, accounting for one third of total global vaccine use outside of China.

While China provides the most vaccines to the outside world, developed countries, including the United States, over-stocked vaccines, posing serious challenges to the equitable distribution of vaccines globally.

The immunity gap is currently the biggest obstacle to overcoming the pandemic, with only 5 percent of the population in low-income countries fully vaccinated.

In 2022, whether the international community can unite and cooperate in the pandemic fight and whether the United States and other countries can shoulder their due responsibilities will to a large extent determine if humankind can overcome the pandemic as soon as possible.

The Center for Economics and Business Research, one of Britain's leading economics consultancies, predicts that the world economy will exceed 100 trillion U.S. dollars for the first time in 2022, two years ahead of its previous forecast.

However, challenges such as resurging pandemics, supply chain bottlenecks, rising inflation, and recovery differentiation are expected to continue to affect the world economy in 2022. The spillover effect of tightening monetary policies in the United States and other advanced economies may also bring more risks to the world economy.

Due to high inflation, the Fed has further reduced asset purchases and is expected to end bond purchases in March 2022.

Furthermore, the Fed will probably raise interest rates three times in 2022, which is expected to have a significant impact on global cross-border capital flows, asset prices, and exchange rate stability. Some emerging markets and developing countries may hence face risks such as capital outflows and currency depreciation that can drag down economic recovery.

What's encouraging is that the Chinese economy has maintained steady progress amid uncertainties and continues to inject confidence and momentum into global recovery.

Relations between Russia and Western countries entered the "ice age" in 2021 as they engaged in fierce confrontation over Ukraine.

Russian President Vladimir Putin recently said that Russia had no room to retreat in a standoff with the United States over Ukraine and would be forced into a tough response unless the West dropped its "aggressive line."

The United States has recently hyped the risk of war between Russia and Ukraine, intending to further undermine Russia-Europe relations and strengthen U.S. influence in Europe.

Consequently, Russia-Europe ties have become more complicated. If the European Union (EU) cooperates with the United States in the future and imposes sanctions on the Russian-German Nord Stream 2 natural gas pipeline project or on the Russian financial system, the EU's own energy security and financial stability are sure to be affected.

Recently, the frequent actions of the North Atlantic Treaty Organization (NATO) in the Baltic Sea and the Black Sea have incited strong objection from Russia. If NATO keeps testing Russia's "bottom line," it may cause serious consequences that can affect global strategic stability.

While Russia and the United States plan to hold a security dialogue in January 2022, it remains to be seen whether the dialogue can stop the deterioration of bilateral ties since there has long been a lack of mutual trust between the two sides and structural contradictions at the geopolitical level.

A new German government was sworn in at the end of 2021. France is to hold a general election in 2022. Germany and France, regarded as the "twin engines" of the EU, are going through a transitional period.

Battered by the resurgence of the pandemic, the EU has been undergoing a tough economic recovery, with low-carbon strategy and digital economy plans being affected to varying degrees.

In the meantime, disputes remain between Britain and France in fisheries and refugees, and divisions between old and new European countries after Brexit will keep expanding. In the face of these risks and challenges, whether the two "engines" of the EU can work closely with each other will affect the direction and pace of the EU's progress.

Europe has started to take more initiative and cut reliance on the United States, finding the latter unreliable following a number of incidents such as eavesdropping on its European allies, a haphazard withdrawal from Afghanistan, and ending France's submarine export deal to Australia.

According to French President Emmanuel Macron, France, which will assume the EU rotating presidency starting from January 2022, aims "to move towards a Europe that is powerful in the world, fully sovereign, free in its choices and in charge of its own destiny."

However, the EU's path to strategic autonomy remains plagued with uncertainties due to internal differences and its dependence on the United States for security.

Seven prior rounds of indirect talks, conducted via European mediators last year, failed to break the impasse between the United States and Iran.

Iran wants all sanctions imposed by the United States and EU to be lifted in a verifiable process.

The United States demands that Iran stick to implementing the provisions of the Joint Comprehensive Plan of Action (JCPOA) and restrict or freeze related nuclear activities, while threatening to adopt "other options" including military force.

The United States expressed its willingness to return to the Iran nuclear agreement yet continued to impose additional sanctions on Iran at the same time. Such arbitrariness puts both sides in a rigid position that doesn't bode well for the negotiations in 2022.

Many analysts believe that the United States remains the main source of uncertainty as the world enters a new year.

As the U.S. midterm elections approach, partisanship is bound to exacerbate, which is sure to intensify racial conflicts and anti-immigrant sentiments. To maintain its hegemony, the United States is likely to continue to carry out "small cliques" diplomacy, interfere in the internal affairs of other countries, and impose more sanctions that can further hinder world peace and development.

The Eurasia Group, the world's leading global political risk research and consulting firm, ranked a divided United States as the top of "The Top Risks for the world in 2021."

Looking ahead to 2022, the risks to the world posed by the United States could intensify