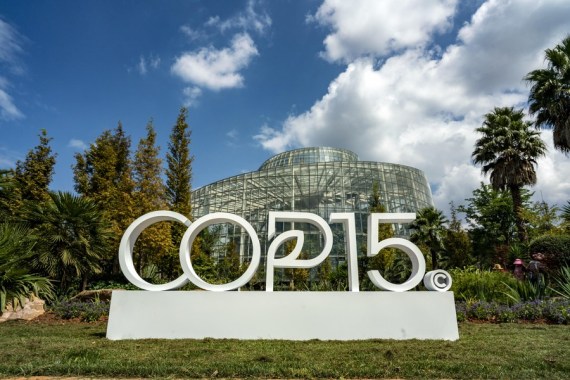 London, 4 January (2022) - Ecological civilization is really about multilateralism and a global convention, which requires the global community to work together, said an official of the World Wildlife Fund (WWF) International recently.

"Civilization is not something just one country can achieve. Civilization means all of humanity, we need to come together," Li Lin, director of global policy and advocacy at WWF International, told Xinhua in a video interview.

The first part of the 15th meeting of the Conference of the Parties to the United Nations Convention on Biological Diversity (COP15) was held in October in Kunming, capital of China's Yunnan Province, while the second part has originally been scheduled for early 2022.

"Civilization is the whole humanity, we need to come together. I really hope that this will be a direction that we can go to explore, which is a more sustainable way, which is at the civilizational level, at the geological level," said the official.

The first part of the COP15 meeting saw the adoption of the Kunming Declaration, which commits to ensuring the development, adoption and implementation of an effective post-2020 global biodiversity framework to reverse the current loss of biodiversity and ensure that biodiversity is put on a path to recovery by 2030 at the latest, towards the full realization of the 2050 Vision of "Living in Harmony with Nature."

"The decision of the global diversity framework really gave us a once-in-a-decade opportunity to make the changes we need to reverse biodiversity losses and to be nature-positive," Li noted.

Li said the real challenge now is to translate the political commitment of the Kunming Declaration into concrete actions.

China's initiative to establish the Kunming Biodiversity Fund is a further important move to support biodiversity protection in developing countries, and its announcement of the official designation of the first group of national parks, a move to further improve the national park system, highlighted the country's efforts towards nature conservation, Li said.

China has converged the different views towards common goals, including the keywords "ecological civilization, nature positive, carbon neutral, building a shared future for all life on Earth," said Li.

Talking about China's plan for peaking carbon dioxide emissions in key areas and sectors as well as a series of supporting measures, and for putting in place a "1+N" policy framework for carbon peak and carbon neutrality, Li said that reflected "China's thinking that climate and nature are not separate issues."

"I think the way China deals with climate and nature issues is very systematic and quite unique," Li said.

Building a shared future for all life on Earth, the theme of the COP15, "really touched my heart, not only for our humans, but there's also wildlife and other living forms that are sharing the planet with us," Li added.