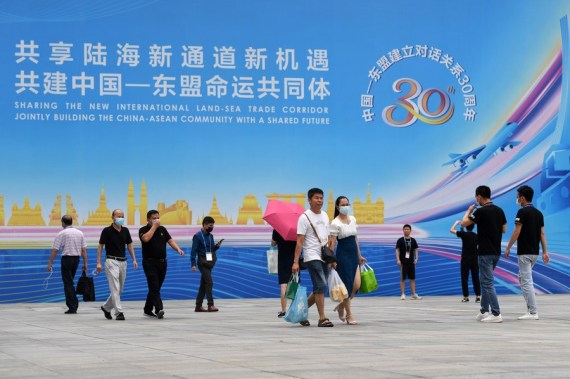 People walk out of the venue of the 18th China-ASEAN Expo in Nanning, capital of south China's Guangxi Zhuang Autonomous Region, on Sept. 13, 2021. (Xinhua/Lu Boan)

As the world's second largest economy which possesses very strong bases in consumption, production and innovation, China will provide the anchor mechanism for RCEP, said Professor Lawrence Loh, director of Center for Governance and Sustainability at National University of Singapore's Business School.

In a recent interview with Xinhua, Loh added that "there's a lot to gain for all parties concerned riding on China as the anchor country in this agreement."

The timing of RCEP taking effect could not have come at a better time, as "we are on the verge of moving from pandemic to endemic," Loh said.

The logic underlying RCEP is very strong and compelling, due to its robust focus on trade and investment and some other correlated issues such as intellectual property rights, which will definitely invigorate and revitalize many economies.

It is very essential to keep the free flow of goods and services, so all the economies can benefit from cross-interactions and navigate out of this crisis of COVID-19, he noted.

China has adopted strong domestic measures to control COVID-19 for the past two years, providing a solid basis for the revitalization of its economy, he said.

Besides China, RCEP groups all 10 ASEAN countries, plus Japan, South Korea, Australia and New Zealand, "which are the most influential parts of the Asia-Pacific," he said, adding that the formation is very difficult to replicate in other parts of the world.

RCEP members are a very formidable combination to enhance the economic recovery effort, "because you have everybody in the team."

The regional trade pact has gained rapid acceptance from its member countries, and this has led specifically to the reduction in the tariffs being levied on imports, which enables many countries now access key markets.

The collaboration between China and the Association of Southeast Asian Nations (ASEAN) already has a very strong history, and RCEP is "an additional dimension."

From the digital perspective, China-proposed Belt and Road Initiative (BRI) and RCEP are very compatible and mutually complementary for all the participants, especially during the strengthening of the digital silk road.

The flow of goods and services can be enhanced and facilitated by digital means. At the same time, the connectivity in communications to advance trade can also add to the vitality of the BRI, Loh said.

Given the current supply chain disruption problem, "I see the potential of the RCEP becoming an Asia-Pacific super supply chain," he said, adding if any parts of the supply chain gets stopped, other countries can come in to patch up.

RCEP will provide a very assuring foundation for many of the economic relations to continue to take place, despite the current tensions in the world brought about by some of the major countries, Loh said.

RCEP will benefit the 15 member countries and the value will "flow" to other countries around the world as the latter will also be able to benefit from the vibrant dynamism of the region, Loh concluded.

Kathmandu, 20 January (2022) - The government has increased the wage of workers involved in the sch…