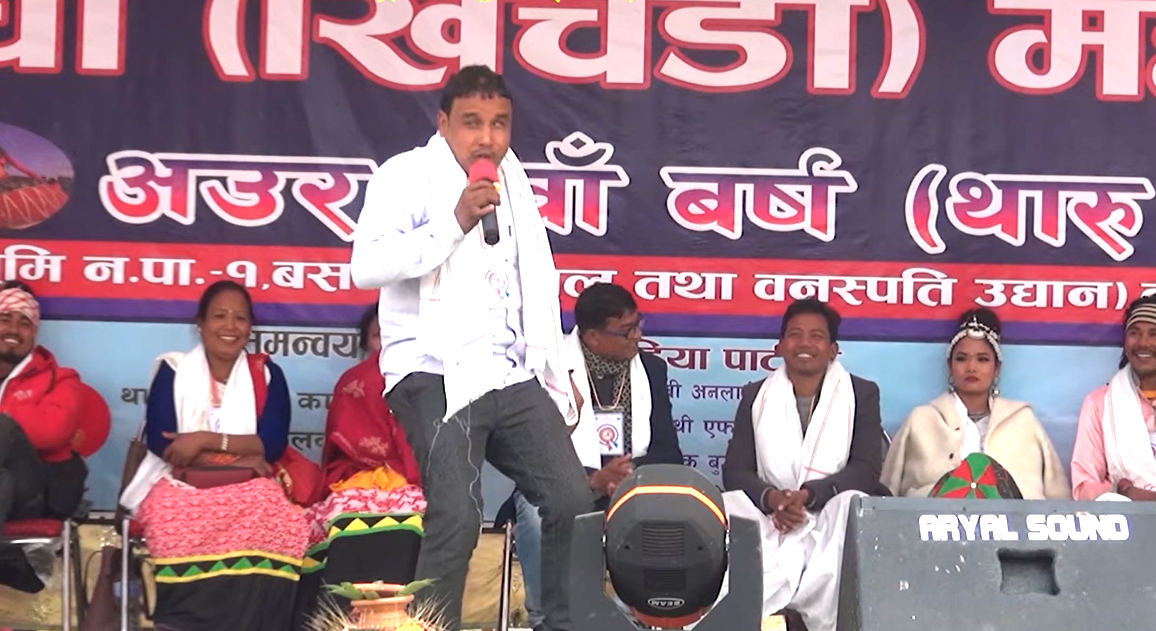 Dhangadhi, 6 January (2022) - Ram Kumar Kathariya who hails from Kailali district in Far Western Nepal is successful in carving a niche in the music world with his art and voice.

Born with ophthalmic problems, he captivates everyone with his magical voice and style of presentation. He is considered a very good singer in the field of Tharu, Nepali and Kathariya language music.

However, he has not been able to perform for the last two years.

Coming from a poor family in Kailali Rural Municipality-2, North Manjhara of Kailali, Ram Kumar owns five kattha (18,425 square feet) land which is his ancestral property. His voice is the only means of his livelihood. He is loved by the music lovers with his ability to perform in different musical events.

Due to the corona pandemic restrictions, he has been unable to perform for the last two years. He says, "Pandemic has affected all areas. For me being blind has made my life more difficult. My voice is the only source of my family's income. The pandemic has dried up my throat."

Before the pandemic he was able to buy two katthas land and build a home with his earnings. His musical journey was going very well.

He adds, "Pandemic affected the world when I was planning to invest in musical world. How could I stay untouched? Now my creations are waiting for platforms."

Ram Kumar started his musical journey in 2007. He has an amazing ability and art to compose songs, give voice and create complete music in sentimental, romantic, cultural, pop, comedy genres.

Ram Kumar has released more than 300 songs featuring his own words, music and voice. These songs have been heating up the music industry. More than 60 songs features chorus. These songs are played in the streets of Tarai-Madesh in all seasons.

His first released album was titled 'Tumhar Bina' in Kathariya language. After that he released more than one and half dozens of musical albums.

His new song 'Dil Dadem Mangbo To' is about to be released.

He says, "Old songs are disappearing. Culture will disappear if we can't preserve and promote original songs and their creators. Art will be saved only if the artist is saved."

He has a family of three including his wife and son. He said that musical stage programmes organized at festivals are strong source of income for him. But he feels sad when he doesn't get proper wage for performing in the stage programmes.

"My labour was exploited in many places. People also bargain for wages. It makes me sad," he said.

Born into a very poor family, Ram Kumar had a problem of congenital glaucoma. The doctor suggested that he needs proper treatment and diet but his family struggles for two square meals a day.

He reached Uttarakhand, India in 2001 in search of work at an early age rather than for a proper eye treatment. He tells that he had to work hard in Meerut, Bareilly, Shimla, Haryana and other Indian cities in the past.

Because of the hard work in India he lost sight of both eyes in 2006. And then he chose the field of music for livelihood.