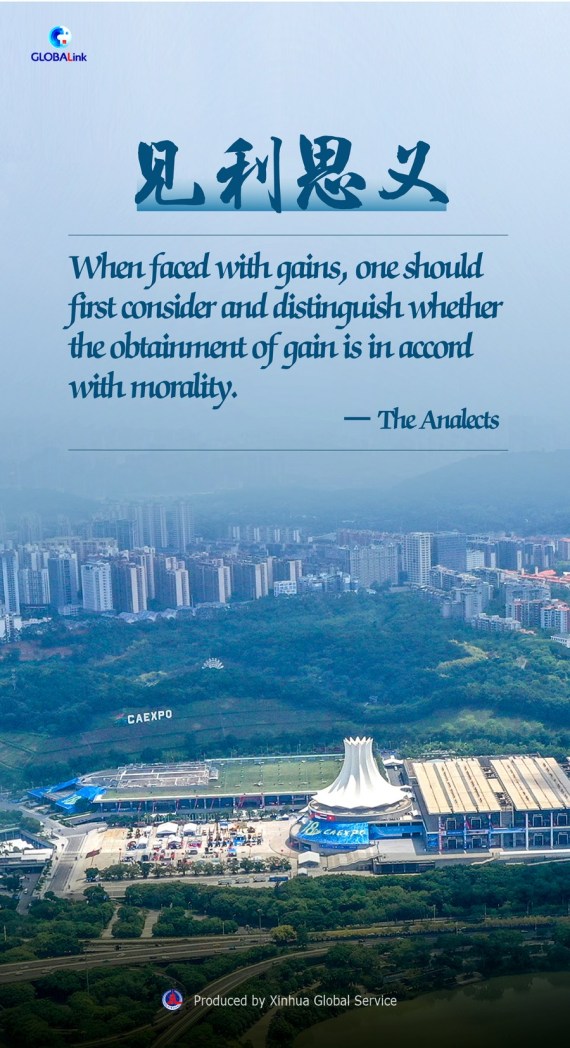 Beijing, 13 January (2022) - When faced with gains, one should first consider and distinguish whether the obtainment of gain is in accord with morality. This is a Confucian criterion for dealing with the relationship between righteousness and gain.

Between the pursuit of gain and the upholding of morality, a conflict has long existed. Because people more often than not may covet personal gains and overlook morality, their actions may go against virtue and violate the laws.

"He who thinks of righteousness when faced with gain, who is ready to lay down his life when confronted with danger, and who does not forget a past promise despite enduring poverty, may be considered a true man," according to The Analects, a collection of the teachings and thoughts of Confucius.

Against this kind of situation, Confucius advanced the stand of "thinking of righteousness in the face of gain," proposing that people should strive for gain on the basis of the principle of morality. He who knows morality is a man of virtue, and he who blindly pursues gains is a petty man.

Chinese society has long been upholding the criterion seen in its firm stand on anti-corruption campaigns. In 2020, Chinese courts concluded 22,000 embezzlement, bribery, and dereliction-of-duty cases, involving 26,000 individuals, according to a work report on the Supreme People's Court.

Justice is also a part of the common values of humanity advocated by China.

The Chinese people are willing to work together with all other peoples around the world to carry forward the common values of humanity -- peace, development, fairness, justice, democracy and freedom, according to a white paper titled "China: Democracy That Works" released by the State Council Information Office last year.

"We should pursue peaceful development, safeguard fairness and justice, increase democracy and freedom, and improve the people's wellbeing. This is the only way to build synergy among all civilizations in the quest for a better future," it said.