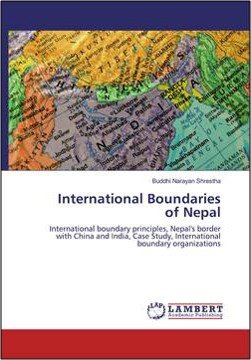 The foreword to the book is written by Martin Pratt, a former director of the International Boundary Research Unit and a professor at the University of Durham in the United Kingdom.

This book deals with principles such as International Boundary Principles, Boundary Delimitation Stages, Reasons for Boundary Disputes, World Boundary Disputes, Measures to be Resolved, Countries Fightingover Boundary, World Famous Boundaries, Border Diplomacy, Boundary Reaching the Sky and Hades. Similarly, the principle of demarcation of Nepal with India and China has been discussed.

This book in many international languages has brought to light information about Nepal's border issues to the international forum. Nepal's Lipulek-Kalapani-Limpiyadhura encroachment by India, legal rights of Lipulek border, internationalization of Kalapani issue, battle over thepointed map between Nepal and India and the possibility of resolving the border issue through amicable dialogue. The understanding reached by China over Nepal's Mount Everest, the details of the joint declaration after its height dispute was resolved, dispute over the border pillar no. 57 between Nepal and China, China's BRI, Nepal's corridor are discussed in the book. Eighteen border treaties that Nepal has sign with neighbors have been included in the annex of the book.

Boundary activities of global organizations such as the UK's International Boundary Research Unit, the American Association for Borderland Studies, the Borderland Research Networks of Asia and Africa, and the International Federation of Surveyors headquartered in Denmark are also described. Similarly, International Border Diplomacy, US-North Korea Two-Minute Diplomacy, Trump's disregard of Nepal's borders on the world map, turbulent Indo-Pakistan border, message of Indo-Bangladesh border agreement are other highlights of the book. It has been published in eight different languages by a European publishing house as it is useful to be included as a basic course text book on borders.

The same book was published by Nirala Publications of New Delhi as a South Asian edition a month ago.