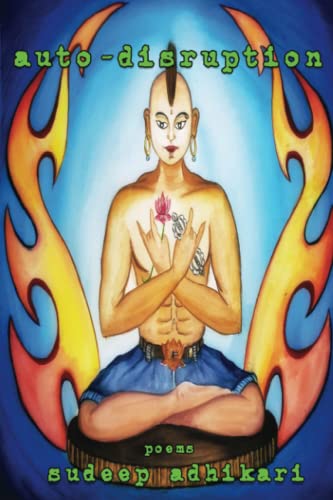 Sudeep Adhikari's "auto-disruption" is an impressively deep work of scholarship and poetry: investigation, exegesis, commentary on the thought of acknowledged great thinkers, philosophers, theologians, cosmologists, both east & west, ancient to modern. A sort of compendium, in poetic form, of intellectual discourse, from Socrates and Diogenes to Foucault and John Cage; Buddha and Dogen to Naropa and Krishnamurti.

Despite the esoteric nature of the subject matter, this work is not a dry analysis only, but a mix--as can be found in Sudeep's previous works--of highly technological language and poetic phraseology, with an occasional nod to the modern Zeitgeist. In his poem "diogenes" Sudeep writes "in the annals/of the least amount of ----/that has been/ever given by any person; diogenes is always THE MAN" (my capitalization, his lower case usage) "standing next/ to the great Jeff Lebowski, the dude."

Some of these poems can be formidable for people, like myself, with only a nodding acquaintance to the work of some of the philosophers under discussion. The scope of this book is awesome but also, occasionally, beyond my understanding--skirting the limits of my comprehension. Sudeep is well-versed in science and a number of other disciplines, and has worked as a structural engineer. This book is the work of a philosopher-engineer-poet of an anarchic disposition.

In the following, I give, in an attempt to relate the gist of the work to the reader, synopses, in paraphrase, of poems that are, oftentimes, themselves, synopsis: ARISTOTLE: "the greatest logician that ever lived"--he who "inspired" the species in realization that though logic is not everything, "without it" we are no better than "mindless brutes." EUCLID deduced a world "logical and coherent"--which is not the world we live in, but his deduction was, in his time, the manifest of a "novel world-view"--that found its voice in Aquinas, Spinoza, and Kepler. DEMOCRITUS understood that "matter...is an assemble/of microscopic atoms, swirling/autonomously in a matrix of a deeper void," which has held good for 2500 years, thus, Democritus is the "atomic King." FREUD looked into the "darkest nooks/of our psyche" and tried, but failed, to "make a science of mind," because, the world--"an interconnected whole"--"is an ever-moving mess." KARL MARX "dreamt/of collective emancipation/of the proletariat/and the understanding/of history--scientific and rational.../but the thing is...there is nothing/we can learn from history:/because what is/in store, is what we will never know." DANIEL DENNETT: "consciousness is nothing but the noise/of a super-computer/we haven't invented yet." WOLFGANG PAULI: "the world is a psychoid whole...a little bit of mind/in matter, /a little bit of matter in mind...a seamless continuity/between our/unconscious and our awake thoughts." FRIEDRICH NIETZSCHE said that we have "forgotten to dance"--have lost "ourselves/in...dionysian frenzy" and become "bound" by rules of a dead god. New men, with "will to power" will create "new values--a new world-life."

These encapsulations, as superficial as they are, hopefully give the reader an idea of the broad range and depth of the work. Work that, as I've previously written, is impressive scholarship...The poetry adds savor to the thing.