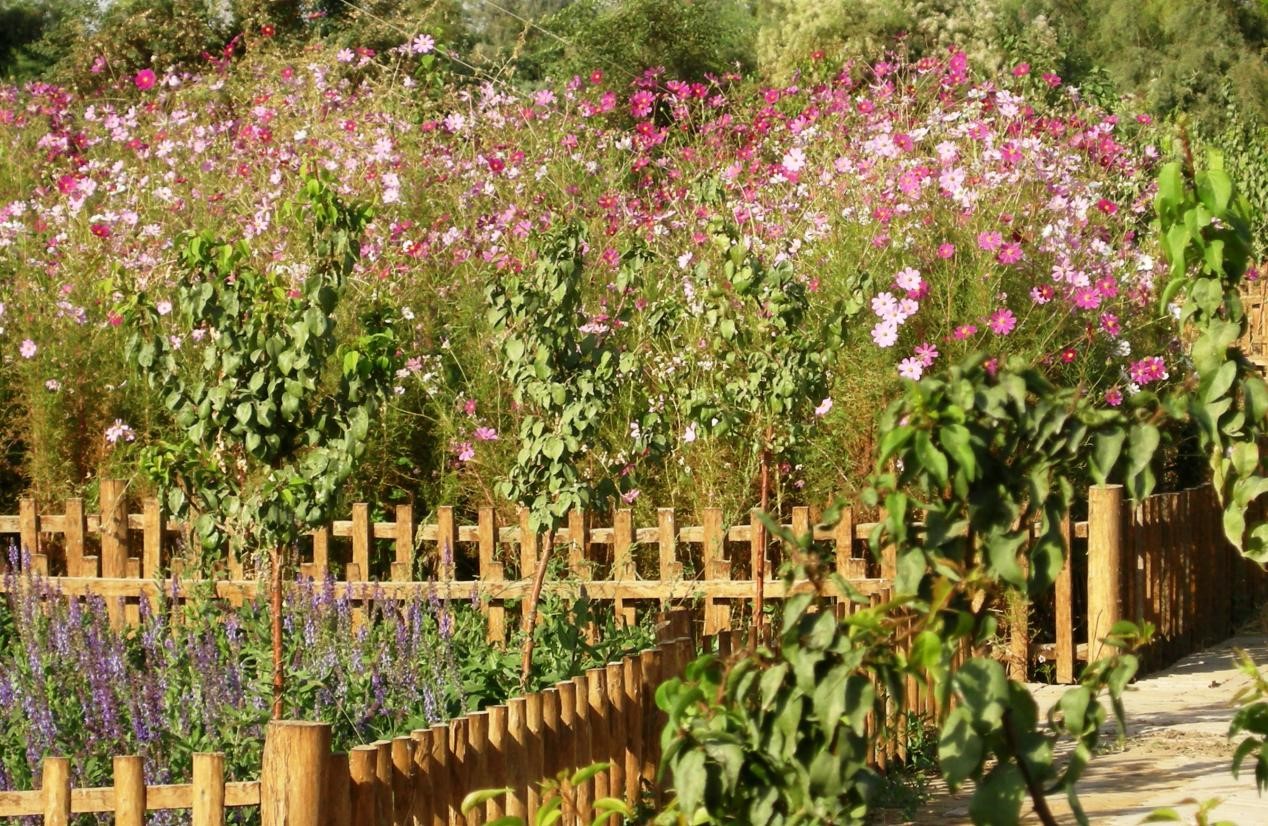 In northwest China’s Xinjiang Uygur autonomous region, a barren desert area once plagued by quicksand in the Turpan Basin, is now a botanical garden filled with lush plants, thanks to more than four decades of sustained efforts of Chinese researchers from generation to generation.

More than 500 species of salt- and drought-tolerant desert plants flourish in the botanical garden, Turpan Eremophyte Botanical Garden under the Chinese Academy of Sciences (CAS), which is also the world’s only botanical garden located below sea level.

In the last century, the site of the botanical garden was a vast expanse of desert where 90,000 mu (6,000 hectares) of areas affected by wind erosion and quicksand were the sandstorm source threatening life and production in the lower margin of the desert.

Sandstorm used to rage in Turpan Basin every spring, causing serious impact on agriculture, according to Pan Borong, a researcher with the Xinjiang Institute of Ecology and Geography, CAS.

“We didn’t go to Turpan to set up a botanical garden in the first place. The local government invited us to help with sand control. After achieving success in the endeavor, we began planning to transform the land into a botanical garden,” Pan told People’s Daily.

After field trips and investigations, researchers started to introduce sand-fixing plants from desert areas in the country’s northwestern regions to the Turpan Basin according to the characteristics of its climate, soil and weather conditions.

A total of more than 10 superior species of wind-resistant and drought-tolerant sand-fixing plants, including Calligonum mongolicum, sacsaoul, rose willow, and desert poplar, have been selected and successfully cultivated for the area.

To better introduce and collect various types of plants from arid deserts and breed and cultivate them in local conditions, researchers began preparations for the building of the Turpan Eremophyte Botanical Garden, the first of its kind in Xinjiang, on a large area of artificial sand-fixing shrubbery in 1975.

After numerous trials in the harsh environment, more varieties have been finally introduced into the botanical garden. Simultaneously, sand has been brought under control, and the hitherto uninhabitable desert region has progressively become livable. Grapes have been planted in the surrounding areas of the botanical garden; and some residents have also moved to the areas.

“These are the results of several decades of unremitting efforts in sand stabilization,” said Wang Xiyong, an assistant researcher with the Xinjiang Institute of Ecology and Geography.

According to Wang, the botanical garden has introduced and cultivated more than 500 species of plants so far, including nearly 60 species of rare and endangered plants endemic to desert.

It has also established room-temperature and low-temperature germplasm banks, where over 3,500 copies of germplasm resources of more than 600 species of desert plants are effectively preserved on a long-term basis, Wang said.

Besides, 12 dedicated gardens (sections) have been built in the botanical garden for characteristic plants, including desert fruit trees grown for profit, wild ornamental plants that grow in desert, and rose willow, he added.

“Turpan Eremophyte Botanical Garden has the most desert plant resources under ex-situ conservation in China. In addition to sand-fixing plants, it also has medicinal plants. Since we have developed artificial breeding techniques, we don’t need to dig wild plants, thus reducing desertification caused by medicinal herb digging,” Wang said.

Since the preparations for its construction, the botanical garden has embarked on a development path highlighting the role of scientific research.

Several hundred species of desert plants have been brought to the botanical garden for breeding research and then sent to the front line of the prevention and control of desertification in northern China after selection and breeding.

In China’s largest desert, the Taklimakan Desert, in Xinjiang, sand-fixing plants, including rose willow, sacsaoul, and Calligonum mongolicum, grow along a highway that runs through the desert, effectively preventing sandstorms from damaging the road.

In 2005, the construction of a 436-kilometer-long green belt along the highway was completed, injecting vitality into the desert. All the plants used to green the highway, which is the world’s longest desert-crossing highway, were selected from the Turpan Eremophyte Botanical Garden.

By developing resources of desert plants successfully introduced and cultivated, the botanical Garden has provided more than one million seedlings and over 50 tons of seeds of desert plants for the Three-North (i.e., Northeast China, North China and Northwest China) Shelterbelt Forest Program, sand prevention and control project, program for turning marginal farmland into forests and grasslands, as well as programs for shelterbelts along desert highways and construction of urban green space in arid regions, making active contributions to desertification control and the development of sand industry.

Researchers have also been engaged in gene research. “We can extract the genes for drought and salt tolerance of desert plants and use them in the cultivation of agricultural crops through gene-editing. We have already achieved success in this regard in research into cotton cultivation and have well applied relevant techniques in our experimental field,” said Zhang Daoyuan, director of Turpan Eremophyte Botanical Garden.