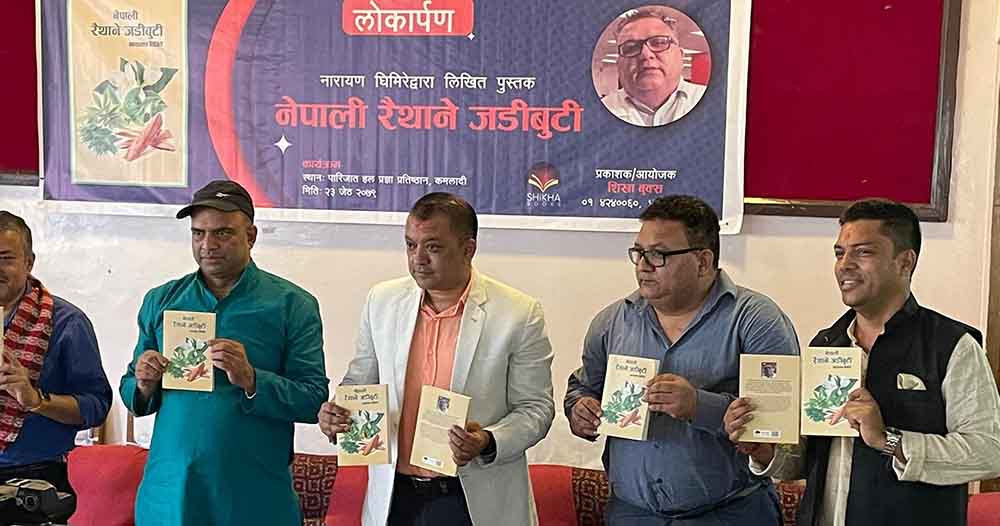 Kathmandu, 7 June (2022) - A book, 'Nepali Raithane Jadibuti', penned by Narayan Ghimrie, a food and medicine expert working in Canada for over a decade, was released in the federal capital on Monday.

General Secretary of Nepali Congress and former Minister for Health, Gagan Thapa, released the book amidst a function. The book is about medicinal herbs of Nepal and their value.

The positive effects of Nepali indigenous plants, such as titepati, dhurseli, khirro, kush, timur (black pepper), moringa, simal are described vividly in the book. The value of such pant in human health is mentioned in the book.

Releasing the book, former Minister Thapa said in view of the potential of medicinal herbs in Nepal, we could utilize this opportunity to reduce yawing trade loss.

He reminded that the government had announced the 'Prime Minister Nepali product and consumption promotion programme' in the current budget speech. "Yog, ayurved, indigenous knowledge and medicinal plants should be linked to tourism," Thapa viewed.

Author Ghimire viewed a long rigorous research was imperative on Nepali medicinal herbs. Policy should be made on consumption of Nepali herbs and Nepal made a centre of food research, he added.