Is a livable city chimera for Kathmandu dwellers? 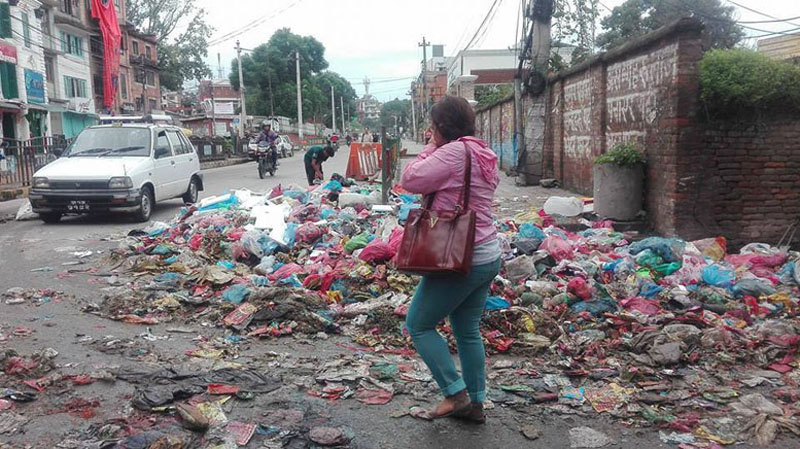 With the monsoon in full swing across the country for over a week, the federal capital Kathmandu witnessed heavy rainfall last Wednesday, June 8. The rain caused a mad traffic jam in many places, as the roads were waterlogged and flooded. It caused sheer inconvenience to the people walking and driving in the city.

Media showed live that the street flood caused by the downpour entered the gate of Baluwatar, the official residence of Prime Minister. Those watching live on social media were shedding comments over it. One said, ‘Now, some initiative would be launched to manage the city well.’ This statement was not only the response to sorry state of city streets, but also warranted urgent action for proper management of urban facilities.

When the Kathmandu Valley sees downpour, the embankments of valley rivers- Hanumante, Manohara, Dhobikhola, Bagmati, Bishnumati, Ichchhumati turn horrible sights with inundation. Other streams are flooded. The streams which are turned into drainpipes are burst in some places causing utter chaos. Similarly, those living in the huts on the river bank face dire state. It occurs annually with increasing scale and severity.

It is worth reminding that, last year, a child went missing in the flooded stream and was found dead after five days in the Kathmandu Valley- he happened to fall into a drainpipe and was later swept away by the flooded Dhobikhola. What an irony of city life, urban development in Nepal!

Moreover, the traffic jam in the valley is caused not only by downpour, but also other events, such as marriage processions, cultural processions, protest rallies, VIP escorting etc. School and office hours are mostly dense with vehicles. It clearly indicates that the valley has no adequate open spaces for rallies and gatherings. Street is for all things- protests and rallies, ceremonies, and transport.

In this connection, Nepali Congress leader Prakash Man Singh even floated the idea of changing school and office hours to avoid traffic congestion in the Kathmandu Valley. Singh was putting forth such views during the meeting of the federal parliament on June 9.

In addition to the traffic jam, the potholes are other common sights in the Kathmandu streets. Although the roads linking to Singh Durbar, Baluwatar and other VIP residence areas are found blacktopped throughout the year, others are left in a sordid state most of the time. And, we call it a city!

The number of vehicles plying on road makes one wonder whether the streets have the bearing capacity. According to the bulletin of Department of Transport Management, 2077, as many as 3.8 million vehicles- private and public- were registered in Nepal. Nepal had first witnessed the vehicle entry since 1996BS.

Interestingly, during his previous stint, Prime Minister Sher Bahadur Deuba in 2017 had to issue directive to his subordinate to fix the potholes on roads within two weeks. His directive had come in the wake of an incident that a school girl had drowned in a ditch on a road in Nepaltar.

Another recurring problem the federal capital is facing is difficulty of waste management. However, to a huge relief to the Kathmandu dwellers, it has been just two days the waste collection began in the city.

Although the bandwagon of providing toilet facility to the public at the call of KMC Mayor Balen has gained pace across the country with many restaurants and banks paying solidarity, the political parties at local levels did not cooperate with him in terms of managing waste from Kathmandu Valley.

It is gross contradiction of big political parties. After assuming the office, Mayor Balendra Shah met with top leadership of major political parties. As per news media, the leaderships of Nepali Congress, CPN UML and CPN (Maoist Centre) assured Balendra of their cooperation to solve KMC problems. But, to sheer disrespect to the central leadership’s decision of cooperation, the local level leaders and cadres failed to extend support in the management of waste.

If the local level cadres and leaders of big parties were directed well, they could preclude the untoward incident at Sisdol and Bancharedanda- the locals vandalized garbage containers, and clashed with security persons in protest. The locals argued that they were betrayed by the KMC time and again for 17 years. The KMC ignored agreements to ensure health, education, employment facilities to the waste/landfill site affected ones.

The above stories and incidents question Nepal’s urban planning and management. It is how abject mismanagement has plagued the Kathmandu city.

Interestingly, in the last World Cities Day on 31 October 2021, a national daily had covered a page with the photos showing the loss of footpaths in different places of Kathmandu Valley.

On the other hand, Minister for Urban Planning and Development, Ram Kumari Jhankri, who was appointed recently then, and Ministry Secretary Ramesh Singh had given messages on the Day. They had focused on the theme of the Day- ‘Better City, Better Life: Adapting Cities for Climate Resilience’. In his message, Secretary Singh had stated, “The National Urban Policy, 2064 has addressed well in an integrated and coordinating manner the diverse challenges of urbanization.”

The miserable condition the city dwellers are going through on the one hand and smart policy and announcements on other shows gross incongruence. Amidst such hassles and nagging problems with anomalies, how capable we are to build resilient city?

Equally important to this regard is political parties’ ignorance to environmental issues in terms of urban management. Although they have begun incorporating issues of urban planning, smart cities and environment and climate change impact in their manifestos and reports, the political parties are mostly mute on it. There are no rallies or campaigns launched and organized by political leaders and cadres for well managed cities.